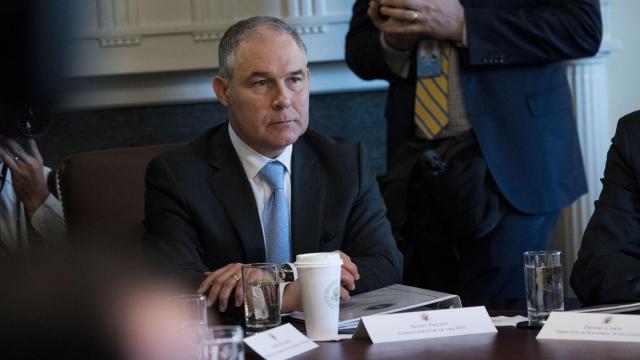 By ERIC LIPTON and DANIELLE IVORY

EAST LIVERPOOL, Ohio — The highway billboard at the entrance to town still displays a giant campaign photograph of President Donald Trump, who handily won the election across industrial Ohio. But a revolt is brewing in East Liverpool over Trump’s move to slow down the federal government’s policing of air and water pollution.

The City Council moved unanimously last month to send a protest letter to the Environmental Protection Agency about a hazardous waste incinerator near downtown. Since Trump took office, the EPA has not moved to punish the plant’s owner, even after extensive evidence was assembled during the Obama administration that the plant had repeatedly, and illegally, released harmful pollutants into the air.

“I don’t know where we go,” Councilman William Hogue, a retired social studies teacher, said in frustration to his fellow council members. “They haven’t resolved anything.”

An analysis of enforcement data by The New York Times shows that the administration has adopted a more lenient approach than the previous two administrations — Democratic and Republican — toward polluters like those in East Liverpool.

The Times built a database of civil cases filed at the EPA during the Trump, Obama and Bush administrations. During the first nine months under Pruitt’s leadership, the EPA started about 1,900 cases, about one-third fewer than the number under President Barack Obama’s first EPA director and about one-quarter fewer than under President George W. Bush’s during the same time period.

The EPA, turning to one of its most powerful enforcement tools, also can force companies to retrofit their factories to cut pollution. Under Trump, those demands have dropped sharply. The agency has demanded about $1.2 billion worth of such fixes, known as injunctive relief, in cases initiated during the nine-month period, which, adjusted for inflation, is about 12 percent of what was sought under Obama and 48 percent under Bush.

“EPA and states work together to find violators and bring them back into compliance, and to punish intentional polluters,” the agency said in a statement. Officials said Pruitt was less fixated on seeking large penalties than some of his predecessors were.

After this article was posted on the web, the EPA issued a statement criticizing the report, and saying that “Administrator Scott Pruitt is committed to enforcement,” and that “there is no reduction in EPA’s commitment to ensure compliance with our nation’s environmental laws.”

The documents, which were reviewed by The Times, indicate that EPA enforcement officers across the country no longer have the authority to order certain air and water pollution tests, known as requests for information, without receiving permission from Washington. The tests are essential to building a case against polluters.

At at least two of the agency’s most aggressive regional offices, requests for information involving companies suspected of polluting have fallen significantly under Trump, according to internal EPA data.

In the last two complete fiscal years of the Obama administration, the EPA’s office in Chicago sent requests for testing that covered an average of 50 facilities per year, or about 4.2 each month. By comparison, after the policy changes, one such request for a single facility was made in the subsequent four-month period.

The enforcement slowdown has been compounded by the departure of more than 700 employees at the EPA since Trump’s election, many of them via buyouts intended to reduce the agency’s size.

Separately, Pruitt’s team has told officials and industry representatives in Missouri, North Dakota and other states that EPA enforcement officers will stand down on some pollution cases, according to agency documents. The retrenchment is said to be part of a nationwide handoff of many enforcement duties to state authorities, an effort Pruitt calls cooperative federalism but critics say is an industry-friendly way to ease up on polluters.

The Times asked top EPA enforcement officials from the Obama and Bush administrations to review The Times’ data, analysis and methodology. They said the slowdown signaled a sea change in enforcement under Trump.

“Those kinds of numbers are stark,” said Granta Nakayama, a lawyer who served in the Bush administration as assistant administrator for the EPA’s enforcement office and who now represents companies facing EPA enforcement actions for the law firm King & Spalding.

“If you’re not filing cases, the cop’s not on the beat,” he said. “Or has the cop been taken off the beat?”

Some enforcement experts suggested that the EPA under Pruitt might have filed fewer cases because it was going after larger penalties. But according to the Times analysis, most of the top penalties were smaller than those in the previous two administrations.

‘It Really Just Scares Me’

On a midsummer afternoon in 2013, boiler ash and steam blasted through a breach at the Heritage Thermal Services hazardous waste incinerator, spewing hundreds of pounds of ash into a nearby neighborhood in East Liverpool.

Tests later showed that the ash contained toxic chemicals. In some samples, lead and arsenic were found at concentrations that “could pose a hazard to small children,” the Ohio Department of Health reported.

“It really just scares me,” Sandra Estell, 64, who lives on a river bluff overlooking the plant, said of the incinerator.

The plant falls under the jurisdiction of the EPA regional office in Chicago, which moved quickly to investigate the episode as a possible violation of the Clean Air Act, federal records show.

Heritage Thermal complied within weeks, and also disclosed that the plant had faced a series of related problems when pressure inside the incinerator had climbed to dangerous levels. George T. Czerniak, who was then the EPA’s Chicago-based director of the air and radiation division, asked for more information about those episodes, and by March 2015 he had signed a formal letter of complaint, alleging a series of Clean Air Act violations that would very likely result in fines, as well as possible civil or criminal action.

A spokesman for the EPA declined to comment on the case’s status, as did Christopher T. Pherson, president of Heritage Thermal. The company said in a statement that it “is committed to continuously enhancing its performance and environmental compliance.”

Estell blames the change in administrations in Washington for the inaction.

Every administration runs into delays when investigating and enforcing environmental laws. But the lack of action in East Liverpool mirrors a pattern of sluggish new enforcement activity under the Trump administration, as represented in data analyzed by The Times.

The Times identified more than a dozen companies or plants like Heritage Thermal that received notices of violation toward the end of the Obama administration, but as of late November had not faced EPA penalties. The findings were based on agency files released through a Freedom of Information Act request to the Environmental Integrity Project, a nonprofit group run by a former EPA enforcement chief.

The EPA’s biggest civil case filed since Trump took office involves Exxon Mobil, which was accused of not properly operating and monitoring industrial flares at its petrochemical facilities. Exxon agreed in October to pay $2.5 million in civil penalties and spend $300 million to install new technology to reduce air pollution.

The agency on Friday also released a list of 21 Superfund sites contaminated with hazardous substances and pollutants that Pruitt has targeted for immediate and intense attention.

But more than a dozen current and former EPA officials told The Times that the slowdown in enforcement is real on the ground, and that it is being directed from the top.

At the Ralph Metcalfe Federal Building in Chicago, which houses a regional office of the EPA, employees said it has become difficult to even start a new investigation.

An agency spokeswoman, in a statement, said “we have not rejected any requests for sampling, monitoring and testing” that were sent to headquarters as a result of the new policy. But agency staff said the memo made clear such requests were discouraged, and many fewer were being drafted.

“We are the boots on the ground and we just are having a hard time now getting the information we need to do our job,” said Felicia Chase, who has worked for nearly a decade as a water pollution enforcement officer in the Chicago office, and spoke in her capacity as a union member.