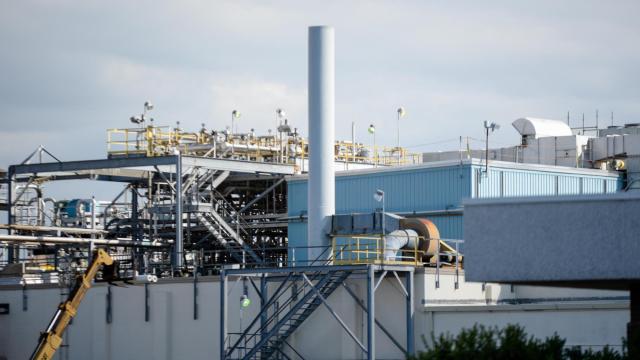 Raleigh, N.C. — Environmental attorneys and Cape Fear River Watch called on state regulators Monday to take a harder line on a manufacturer over GenX and other pollution, and they threatened the company with a federal lawsuit if it doesn't stop all emissions within 60 days.

The Southern Environmental Law Center said the state Department of Environmental Quality should essentially declare an emergency at the Chemours plant in Bladen County, shutting down air emissions of a long string of chemicals. Geoff Gisler, the lead SELC attorney on the suit, said he wasn't familiar enough with Chemours operations to know whether that would require shutting all or much of the chemical manufacturing plant, which is one of the county's largest employers.

Since chemicals seem to be leaching into the water from both air and ground, Gisler said stopping the spread of pollution may entail digging up and disposing of dirt.

"This company's gotten by for decades causing this massive contamination, many miles wide," Gisler said. "At this point, the first step in fixing that problem is to stop making it worse."

Chemours' press office did not respond to an email seeking comment, which has been standard procedure since last year, when the Wilmington StarNews ran a series of stories detailing GenX's presence in the Cape Fear River.

Since then, Chemours has stopped releasing GenX directly into the river from its manufacturing line, but the chemical has been found in rainwater and in wells, and long-term plans to stop its spread aren't moving fast enough, the SELC argued Monday in filings drafted on behalf of the Cape Fear River Watch.

Megan Thorpe, a spokeswoman for DEQ, said the department will review the request thoroughly and make "an appropriate decision." She noted that much of the petition draws from previous DEQ enforcement filings against Chemours. The department has, at times, ordered Chemours to take action and it has accused the company of lying. It has threatened the company's permit, but officials have also said they have limited power to simply shut down the facility.

The SELC argued Monday that DEQ has already shown the ongoing contamination presents an "imminent danger to the health and safety of the public" and that DEQ is required by law to stop air emissions until technology is in place to reduce them to safe levels. If the department won't, the group can appeal the issue to Superior Court, Gisler said. It also threatened Chemours with lawsuits under two separate federal environmental laws, potentially opening another path for enforcement.

The health effects of GenX and other chemicals emitted at the plant are not well documented, but GenX was developed to replace a substance linked to cancer and which triggered a $670 million settlement to cover more than 3,000 lawsuits. DuPont, which spun Chemours off in 2015, knew about the dangers from those chemicals decades ago, the SELC said Monday, pointing to company studies.

DuPont had discharged GenX into the Cape Fear since 1980, the SELC said, and now it's one of 33 related chemicals found in private drinking wells near the facility. In Monday's filing with DEQ, attorneys questioned studies that make GenX appear less toxic than the compounds it replaced, and they pointed to newer research that suggests danger.

They also pointed to a Department of Health and Human Services examination of cancer data from New Hanover County, which found higher rates of testicular and liver cancer from 1996 to 2015. But that report found lower rates in Brunswick County, which also gets its water from the Cape Fear River, and in Bladen County. The department said at the time that "overall the results are what we would expect to see looking at multiple types of cancer in multiple counties, with some rates below and above the state rate."

Gisler noted the cancer rates aren't all his group depended on. The filing with DEQ says DuPont's own GenX studies began as early as 1963 and showed health effects in lab animals similar to problems caused by the predecessor chemical. It also says that, as early as 1984, the company was aware that dust from its manufacturing stacks was settling "well beyond" its property line.

"The actions of DuPont and Chemours over the last four decades have put the health of hundreds of thousands of North Carolinians at risk," the SELC and Cape Fear River Watch said in their filing to DEQ. "Chemours continues to emit hundreds of pounds of contaminating chemicals into the environment each day."