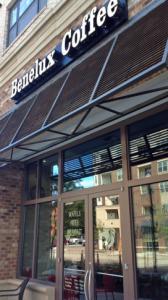 In the summer of 1998, Steven Halaszi traveled to Belgium and the Netherlands with his soccer team to compete in a tournament. The outcome of the soccer games has long been forgotten, but the Benelux culture has been remembered. Landing in Amsterdam’s Airport Schiphol, Steven bought his first Stroopwafel and headed to Belgium. In between soccer games, the Belgian street food made a lasting impression. In particular, the Brussels-Style Wafels were the most delicious and was the catalyst for the Benelux cafes.

After working as a manager for various restaurant concepts, Steven was now learning about coffee in San Francisco. Here, he experienced what true Italian coffee drinks are from Gary Rulli of Emporio Rulli. After many cafe lattes later, Steven and his wife Keta were ready to open Benelux Café. They made the move across the country to Raleigh, NC in 2010. Almost immediately, the first Benelux café opened in the Historic City Market in Downtown Raleigh. Almost to the day two years later, the second Benelux opened inside of the Alexander Family Y.M.C.A. At this point, running two vibrant cafes was a big step from operating just one. Steven’s dad, Steve, moved to Raleigh to assist with the day-to-day operations.

We became very serious about our coffee in late, 2012. This is when we started to roast all of our coffee beans in small batches. We have partnered with a family-owned coffee importer that deals directly with farmers. Once the green beans reach us here in Raleigh, we immediately roast them.

Now, we’ve come full circle: The streets of Brussels and Amsterdam have come through in our cuisine, the tradition of coffee and tea has impacted our drinks, and the love of community has made us who we are. Come join us when you can!

Ummm..this place Is cool. Yelp app did its job once again. Saw the great reviews and had to give it a whirl. It's down in City Market which is cool. The... (more)

Searching my handy dandy phone on Yelp for a coffee shop this morning, Benelux came up and it was super close, I am very guilty of going to the usual... (more)

While I was out visiting my friend in Durham, we decided to head over to Raleigh to go to a dueling piano bar. My friend was super tired from a long day of... (more)