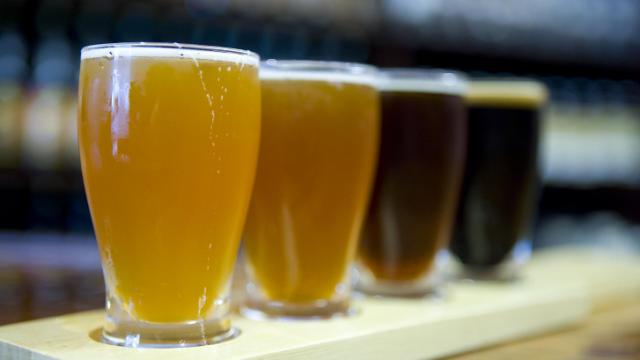 I’ll be the first to admit that I am no beer expert. I tend to drink “girly” beers - a pint of the Ace Pear Cider at Tobacco Road is my go to brew, although given the fruitiness I don’t think it technically counts as a “beer", but rather a "beer alternative." But I do know good bars and what keeps people coming back: product selection, atmosphere, location and good company.

The following are a few of my personal favorites, in no specific order, and also some of the favorites that came most highly recommended by my passionate Facebook friends who certainly don’t mind talking about beer during the workday.

Aviator Tap House (Fuquay-Varina): If you haven’t made the trip to Fuquay-Varina yet, now is the time. The Tap House is located in the old Varina train depot. (I’ve told you that I’m a sucker for a great venue, right?) “Today the historic Varina train depot houses an African mahogany bar that spans 38 feet. This is a true beer drinker’s heaven with lots of wood and hearty plank floors,” according to the Aviator Brewing Company website, which I can validate from several first-hand visits. This vintage venue makes for a great evening out enjoying any of their seasonal or year-round brews with friends. The atmosphere gets kicked up a notch when they have live music performances and if you’re up for dinner (which you better be when drinking a 9.2% ABV Devil’s Tramping Ground), they also opened their own smokehouse restaurant just across the street earlier this year. But do yourself a favor – don’t cross the road with a beer in your hand. Just order another round when you get to the table and are deciding on which version of pork to enjoy with your brew. Aviator brews five year-round beers, two spring seasonals, three for summer, three for fall (get ‘em before they’re gone!) and two for winter.

Fullsteam (Durham): Nestled in a burgeoning corner of downtown Durham, Fullsteam calls Motorco “neighbor” and welcomes just about anyone to their craft-brewed shindigs – from the beloved food trucks, to your furry companion or child. Not only is the converted warehouse a testament to making something old “new” again, but their philosophy on beer is full-circle, too: “our vision is for our best-selling beer to be year-round, sustainable, scalable, distinctly Southern beer and brewed 100% with local ingredients.” That’s pretty easy to get down with in my book. Fullsteam features five year-round beers, two seasonals (with more to come) and even selections they call “crowd-sourced craft beers." (Read more on that here.)

Boylan Bridge Brewpub (Raleigh): Largely selected for the iconic view of the Raleigh skyline, Boylan Bridge Brewpub also scores major points by brewing their own selection on site. During the first visit I made after their long-awaited opening, our entire group was largely underwhelmed with the beverages, menu and atmosphere, but being the eternal optimist, I gave BBB a few more tries and the experience greatly improved each time as the Brewpub has fine-tuned their product, accompanying menu and atmosphere. Serving seven year-round brews (most with a 6.0% ABV) and two seasonals, the $4.00/pint price point is also respectable. (Check out their Tuesday $3 pint special if you’re in need of a weeknight brew!)

Flying Saucer (Raleigh): In my mind, this is the original Raleigh beer bar thanks to Mondays in college (pint night, for the win). Where else can you drink the entire selection of 200 brews and get your name on a commemorative plate (ahem, saucer) that hangs on the wall, anyway? Eighty-one beers on tap is certainly impressive and their bar food isn’t too shabby, either. What may be really impressive though is the number of Flying Saucer faithfuls who are on their second or third “Ring of Honor” mission (the top 10 is regularly updated online).

The Raleigh Times (Raleigh): There’s not a day that goes by that I don’t see at least one of my friends, if not many more, check in on their favorite location-based social network at The Raleigh Times. Serving a full menu until 2 a.m. every day of the week certainly helps keep a steady flow of traffic in this downtown Raleigh establishment and even on chillier fall weekends you can expect every table and chair on the Hargett Street sidewalk in front of The Times to be occupied. The Times specifically touts their selection of Belgian brews but also offers a wide selection of domestic craft beers and world beers. And if strong beer is your thing, check out this recent post on their Facebook page: “After some complex mathematics I've just determined that the average ABV (alcohol by volume) of our current draft lineup is 9.7%. WHOA!” 10 people liked that post. Shocking, right?

Honorable mentions: Busy Bee, Isaac Hunter's Oak City Tavern, Village Draft House, World of Beer (“500 bottles and 50 taps”, according to a friend in the know), Brewmaster’s (“they rotate most of the 66 taps every month and they are huge supporters of NC beer," according to another), The Brickhouse (“40 beers on tap," chimes in a third friend), Natty Greene’s and Draft. Each of those received multiple votes of support amongst members of my social network.

How many of the above have you found yourself patronizing? Did we miss a legendary local establishment that no beer drinker should ever go without? Don't be shy - let's hear it in the comments below.