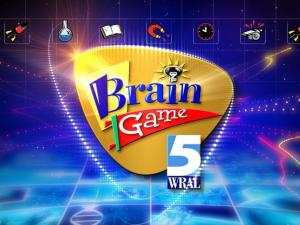 Brain Game is an academic quiz show for high school students (grades 9-12). The regular season games will be taped October-January, and the playoffs/championship will be taped January-April.

1. All public (including charter) and private high schools in the WRAL viewing area are eligible to compete. Teams from home schools or home school collectives are also welcome. No prior qualification is necessary.
2. Each school will be allowed to play only once per regular season.
3. Regular season competitors are scheduled on a first-come, first-served basis, with preference given to schools in the WRAL core viewing area.
4. If your team has not participated in the past, please fill out the online registration form and you will be contacted by the Coordinating Producer.

1. Three teams, with three players each, compete in a game during the regular season.
2. Each team may have one alternate player.
3. After the Arts & Literature round, an alternate may be substituted, but must stay in place for the remainder of the game. Otherwise, alternates may be substituted during a commercial break and only due to an existing player’s illness or other physical inability to play.

1. Brain Game questions are created by a panel of writers, including current and former North Carolina teachers. Members of this panel also serve as judges during games.
2. Correct answers are worth 20 points. For incorrect answers, 20 points will be deducted.
3. Each game consists of the segments listed below in that order. Unless noted, there are 10 questions per segment.

4. Extra Credit: In the commercial break after the Globetrotting round, each team will secretly write down a number of bonus points, 0-100, they are willing to risk on the “Extra Credit” question based on the Globetrotting countries. All teams will be asked the same question and they will secretly write down their answers. Answers and points risked will be revealed at the end of the game. Those with correct answers will add the “Extra Credit” points to the score. Those with incorrect answers will have the points deducted from their score.

1. With the exception of Name Game, the questions in each segment are open for all teams to answer.
2. Questions are answered by buzzing in. Teams may buzz in once the host begins reading a question.
After buzzing in, the team must wait for the host to recognize them. The player who buzzed in may
confer with teammates. Once the team is recognized, they must answer within 5 seconds. The judges
will sound the bell when time is up. If no answer has been given, points will be deducted from that
team.
3. If a team answers incorrectly, the question is then open for one remaining team to answer.
4. All questions will be read only once. If no one buzzes in to answer a question after 5 seconds, the
host moves on to the next question with no impact on any team’s score.

1. Each question lists its answer and any acceptable alternate answer. In the event an answer is
incomplete, for instance giving a last name when first and last are required, the host will ask for more
information or require the player to be more specific. Any incorrect information given makes the entire
answer incorrect.
2. It is at the host’s discretion to ask for clarification or a ruling from the judges.
3. Only the first answer given will be accepted.
4. Pronunciations do not have to be exact. A plausible or phonetic pronunciation is usually acceptable,
unless it demonstrates a fundamental lack of understanding about the correct answer.
5. If a player from a team that has not buzzed in answers a question, the answer does not count, even if
the given answer is correct. No points will be deducted. The team that did buzz in will be allowed to
answer.
6. If someone in the audience shouts out an answer, that question will be thrown out.

1. All decisions of the show’s Producer are final.
2. Protests should be made to the judges during the first available commercial break. Delayed protests
will not be considered.
3. Reasons for protest include acceptability of an answer, execution of game procedures, or scoring
errors. Protests will be considered only if they affect the outcome of the game.
4. If a question contains a verifiable factual error which misled a player into giving a reasonable
response to the information provided, the response given will be accepted as correct.
5. If a question contains a verifiable factual error which misled a player into giving no response (leading
either to an unanswered question or a question answered by the opposing team), the question will be
tossed out with no impact on score.
6. A buzzer check will be made at the beginning of taping. If a buzzer stops working during play, the
team should notify the host immediately. Protests after the fact about buzzers not working will not
invalidate a game. In the absence of a completely functioning buzzer system, a designated official will be
the final judge of which player signaled first. That judge’s call is not subject to protest.
7. Only the judges may determine whether a team was given the allotted time to answer a question and
their decision is not subject to protest.
8. Intangible factors, such as breaking a team’s momentum, will not be considered by the judges.
9. If a protest is accepted, scores will be adjusted accordingly.

1. All 12 regular season winners advance to the playoffs. Six wild card teams (highest scoring, nonwinners)
will also advance.
2. All six Round One winners will advance to Round Two. From these games forward, the matches will
consist of two teams instead of three.
3. All three Round Two winners, plus one wild card team advance to the Final Four.
4. The two winners of the Final Four matches will play for the Championship.
5. Competitors will be “seeded” and matched based on their scores.

1. All players, coaches, school representatives, and other persons associated with a team are bound by
an honor code to behave responsibly and ethically. This includes, but is not limited to: treating all other
participants and staff with courtesy, neither giving nor receiving impermissible assistance, not creating
the temptation for another to cheat, abiding by all decisions of the Brain Game staff, not colluding with
another person to "fix" a game result, not intentionally "throwing" a game, honestly reporting details of
game situations to tournament officials, and reporting violations of the honor code.
2. Instances of misconduct may result in removal from the studio, suspension of a participant, and/or a
team ban from participation.

1. Teams invited to play Brain Game will be contacted by the Coordinating Producer.
2. All shows are taped on Saturdays at the WRAL-TV 5 Studios. Please invite your parents, friends, and
any supporters to the taping to cheer you on.
3. Teams, coaches, and anyone associated with the players or their school are permitted entrance to the
studio only for the game they are scheduled to play. All are prohibited from viewing the tapings prior to
their scheduled game. Violation will result in that team’s forfeit.
4. Teams will receive a package of information for their game day, including directions to WRAL, arrival
time, where to meet, etc.
5. Coaches should provide the Coordinating Producer the names of their players and alternate at least
one week prior to taping.
6. If a team is more than 15 minutes late, and does not contact the Coordinating Producer, or does not
show, that team will be forced to forfeit the game. The forfeiting team will not be invited to participate
again for a minimum of one year. Exceptions will be made for certain emergencies at the discretion of
the Producer.
7. At a briefing prior to taping, teams will draw for positions on the set. Game rules will also be
reviewed.
8. Photographs may be taken when the television cameras are not taping.