Raleigh, N.C. — Children living with ADHD, or Attention Deficit/Hyperactivity Disorder, now have a mobile phone app to help them stay focused and calm so that they might achieve more in school. ADHD is the second most common learning disorder in children.

The mobile app is called AidDHD. The team of three students who created the application are from Raleigh Enloe High School's Bioscience Academy.

AidDHD has already won a place in the top five of the Lenovo Scholars Mobile App national competition. More than 5,000 students in 21 states participated. A national voting process will determine which of the top five teams, two of which come from Enloe, will become the fan favorite.

Enloe students Shruthi Kunjur, Shreya Kota and Rachana Kadikar worked together to create AidDHD. To code the app, they learned how to use "block coding." It enabled them to create a colorful app with an interactive penguin mentor named Kenny. 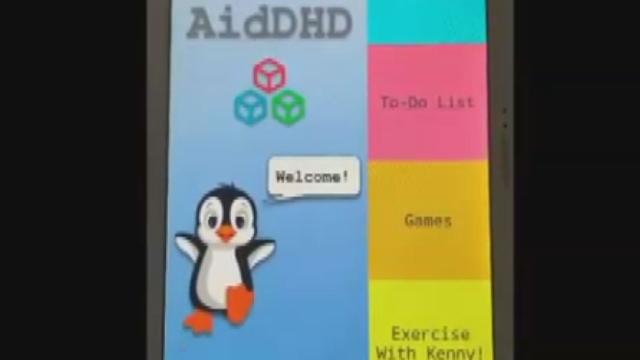 The challenge also required a lot of research. First, they were careful not to duplicate the work of any other current application offering help for young students with ADHD.

"There was no app that combined the physical and mental part," said team member Shreya Kota.

The physical challenge for children with ADHD is reducing their hyperactivity. Research led the student team to include different exercises for the children. The app includes video demonstrations.

Children with ADHD typically have problems focusing their attention. To address the mental challenge for children with the disorder, the team developed a structured system of rewards.

Rachana Kadikar says the problem is common for children with the disorder. "ADHD kids tend to have deficiency in focus, patience, memory and stuff like that."

One possible remedy is through the use of controlled breathing. "Focus on me and breathe in through your nose for three seconds" is the instruction offered in one exercise video.

The team understood that rewards in the form of games could be used to help motivate children. One program lets the child paint digital pictures with their fingers. Shruthi Kunjur says, "That helps with creativity because it allows their imagination to really have no bounds."

Not only did the Enloe team earn a place in the top five of the competition, Kunjur notes another honor. "We won the M.I.T. App Inventor of the month for April," she said.

The AidDHD team is competing against another Enloe team for the fan favorite voting. That team created "Sports MAN", a mobile app that offers help with diagnosing and treating a sports injury when there are no medical professionals present.

The voting for fan favorite ends on July 13.