Encores all around - Garner nurtures young people through the arts 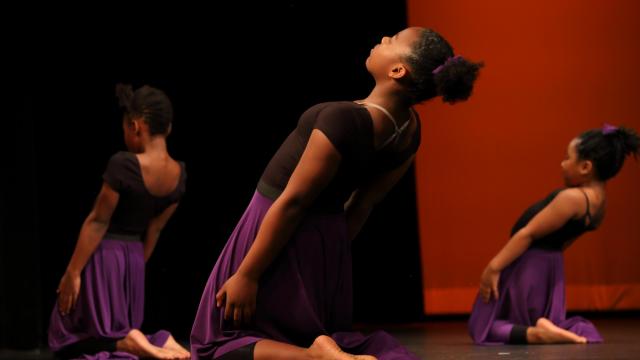 It's a childhood rite of passage to play dress-up, engage in make-believe, color and learn fundamental lessons through songs. As children become teenagers and grow into adults, they forge their own paths that span different subjects and disciplines, but much of what we first learn as kids is rooted in the arts.

Recognizing the importance of the arts, Garner is cultivating the talents of local youth who are drawn to activities such as singing, dancing and drama.

The town boasts a robust arts community that fosters creativity and imaginative expression. Places like the Garner Performing Arts Center — a 471-seat auditorium located in the old Garner High School — and organizations like TheGifted Arts and the Towne Players of Garner are helping to nurture young people through theater, music, dance and more.

"Our vision is to engage young people and give them the opportunity to unlock their potential and realize their personal power," said Nicholé Morgan, founder and CEO of TheGifted Arts, a Garner-based non-profit organization for students interested in the performing arts. TheGifted Arts uses the arts to teach young people life skills, confidence and character building.

"We're very intentional about helping students make a direct connection between what they're learning through the performing arts through our program and how those can translate into school and other areas," Morgan said.

According to a study by the Center for the Neurobiology of Learning and Memory at the University of California, brain research shows music improves skills in math and reading, and promotes creativity, social development, personality adjustment and self-worth. Other studies have found that arts education can help close the academic achievement gap between low-income and high-income students, and keep some students from dropping out of school.

Nicholé Morgan and her husband, CJ Morgan, TheGifted Arts co-founder and COO, both credit their arts involvement as the inspiration behind their nonprofit and emphasized the importance of the role the arts have played in their lives.

"Nicholé and I worked with a YMCA program in college, and a lot of what we did there, it was kind of the impetus for what we do now, which is to use the arts to build skills, confidence, professionalism, presentation literacy and critical thinking in our students while performing and doing all types of different art forms," CJ explained.

TheGifted Arts has multiple programming including weekend programs, after-school programs, and summer camp. Both Nicholé and CJ are well-equipped to work with youth in this space. Nicholé has a background in sociology and a master's degree in education with a specialization in out-of-school time and community education leadership. CJ works as a counselor for the Wake County Public School System and has a bachelor's degree in psychology and a master's in counseling education.

One of the biggest lessons they teach students is to take risks. Whether it's singing a solo in front of their peers or rehearsing for a performance, there are lessons to be learned whether that risk results in success or "failure."

"Sometimes you succeed and sometimes you don't, but we learn that through failure, we find success," CJ Morgan said.

Nicholé Morgan added, "Sometimes through failure there is self-discovery."

Just around the corner from TheGifted Arts (located in Garner's historic downtown on Main Street) is the Garner Performing Arts Center, or GPAC. It's where 15-year-old Isaiah Bussey could be found recently rehearsing for his starring role in "Honk Jr.," a theatrical and musical adaptation of the Ugly Duckling fable.

The rising junior at Enloe High School joined the Towne Players of Garner's summer theater camp two years ago. Towne Players has been a cornerstone of the performing arts scene in Garner for more than two decades and is one of the premiere community theater groups in the Triangle. Each summer it hosts a four-week theater basics camp for children ages 5 to 11 and a production camp for teens ages 12 to 18.

Auditions for the teens are open to the public, and the camps culminate in a summer show. Bussey, who has a passion for music and theater, heard about the camp through some friends and said he was really excited to play the lead role this summer.

The talented teen said that he enjoys bonding with his castmates and being around people with similar interests. As someone who wants to pursue a professional career in the arts, Bussey said that community theater is a great way for people to "get a taste of it." He also said he's learning skills that go beyond the stage.

"When you get older you are going to have to work with other people and make friendships. The performing arts help you to be able to express yourself in your own kind of way," he said.

Bussey noted the great mentor he has found in Beth Honeycutt, who runs the Towne Players summer camp and is director of the show. Her husband, Scott, is technical director for Towne Players, and their daughter, Arlie, a classically trained soprano who was Miss North Carolina in 2012, is musical director.

"We want to give every child who is interested an opportunity to experience live theater," said Beth Honeycutt, who emphasized that the camp is unique because it is free for the teens.

Need-based scholarships are available for the younger campers. In addition, every teen who auditions is accepted.

"Our shows are very high quality with amazingly talented young people," she said. Past Towne Players teens have gone on to professional careers in the performing arts and have been accepted into prestigious performing and fine arts university programs.

In October, the Towne Players are branching out by putting on a production of "The Little Mermaid" that will feature a combined adult and youth cast.

There is a palpable passion for the arts in Garner, as Nicholé Morgan notes. And people like the Morgans and Honeycutts are leading the charge. By doing so, they are helping many young people to become creative, resilient and productive adults.

"We're daring to redefine what the performing arts look like in the Triangle and especially in Garner," Nicholé Morgan said. "We're excited that the Town of Garner is responding positively to it. I think making the performing arts more culturally and age relevant for the young people that are in the area is super critical. We're grateful that Garner is being a champion and cheerleader for our work."