Emotional day as Baby Michael remembered 21 years after his death

Fayetteville, N.C. — It has been an emotional day for the Cumberland County Sheriff's Office. However, it's a day they have been waiting for 21 years.

Tuesday, they all said goodbye to Baby Michael. The Sheriff's Office never gave up hope they would find the mother they said put the infant in a plastic bag and tossed him beside a road.

This has been a long time coming for not one sheriff but two. Sheriff Moose Butler started the investigation back in 1993. He started the tradition of coming out here and having a memorial service so that Baby Michael would not be forgotten.

A solemn headstone with a simple message, "We Love You." The cemetery next to Hair's Chapel Free Will Holiness Church is were Baby Michael was buried 21 years ago. On Tuesday, Sheriff Ennis Wright placed a wreath beside the grave, fulling a promise to find his mother. 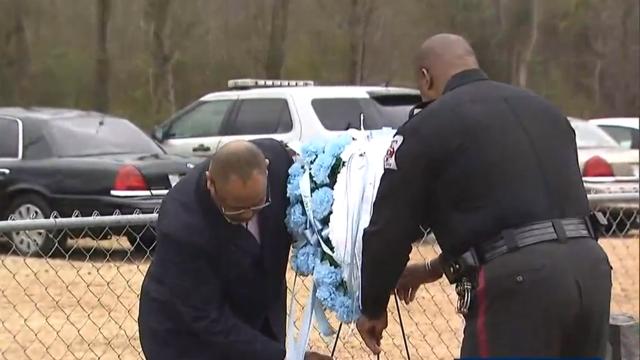 "Officers here, deputies here have kids their self," Wright said. "So we wanted to make sure we had closure for this kid."

Baby Michael would have been 21 years old Tuesday. He was found by a Fort Bragg soldier dead in a plastic bag on Canady Pond Road. Investigators used DNA to track down his mother. Deborah O'Conner, 54, was arrested about two weeks ago and charged with first-degree murder.

Earl Swinson visited the grave Tuesday. He was pastor at the church when Baby Michael was buried.

"With the new DNA, the way it is now, you can't get by with a crime," Swinson said. When asked if he ever thought they would find the mother, Swinson said "No, I didn't really think it."

Investigators say O'Conner has confessed to being the child's mother and leaving him along the road. Mark Rowdan, the sheriff chaplain, said this has been tragedy for the family.

"It's a travesty that a mom would do that to their own child, but yet now that mom needs prayers, and we need to find forgiveness in our heart for this mother as well," Rowdan said.

The ceremony lasted about 15 minutes but the investigation has gone on for 21 years. Wright said there probably won't be any more ceremonies at the grave because the whole purpose of being there was to find Baby Michael's mother.