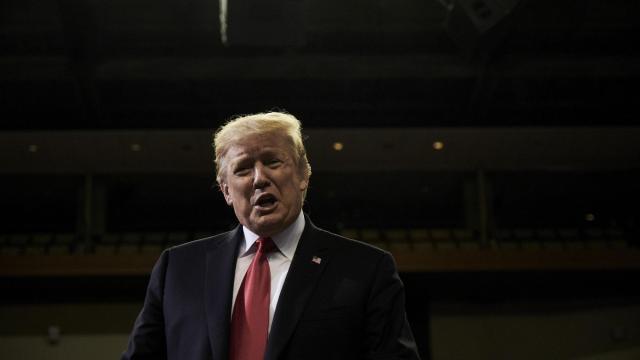 COUNCIL BLUFFS, Iowa — President Donald Trump stepped up his attacks on Democrats on Tuesday night as he sought to paint them as the party of “unhinged” and “wacko” radicals who should not be trusted with control of Congress.

At a boisterous rally, Trump returned to the campaign trail for a victory lap after hosting a ceremonial swearing-in of Justice Brett Kavanaugh at the White House, and he made clear that he will use the confirmation fight as a rallying cry in the remaining weeks before the midterm elections. Supporters cheered exuberantly at the mention of Kavanaugh’s name.

Pointing to the opposition to Kavanaugh, who was accused of sexual misconduct by women who knew him in high school and college, Trump said that Democrats had become “totally unhinged,” and he cited a series of them by name as the audience booed. “The Democrats have become too extreme and, frankly, they’ve become too dangerous to govern,” he said. “They’ve gone wacko.”

The president’s evolving campaign stump speech is part of a concerted Republican effort in recent days to recast the protests over Kavanaugh as the actions of an “angry left-wing mob.” In effect, Trump and his allies are trying to paint his opposition in the same light that he has been painted during his time on the national stage. A former aide recently wrote a kiss-and-tell book about Trump titled “Unhinged,” and others have privately questioned his mental stability.

By turning the tables, Trump hopes to give supporters reason to turn out Nov. 6 even as most polls show Democrats likely to pick up seats in the House and possibly, though less likely, in the Senate. The Democrats, he said, were not merely wrong on policy, but were practitioners of the “politics of anger, division and destruction.”

“You don’t hand matches to arsonists,” the president told an arena filled with thousands of fans, many wearing his signature red “Make America Great Again” baseball caps or holding up signs with sayings like “Women For Trump” and “Finish the Wall.”

The rally here on the Iowa-Nebraska border brought him back to farm country at a time when his tariff war has left many agricultural businesses and workers caught in the middle. Trump sought to reassure them that he still has their backs, and he said that he was following through on a campaign promise to lift a federal ban on the sale of higher-ethanol blends of gasoline during summer months.

“We’re going with E15 year-round,” he said to applause. “I made that promise during the campaign,” he said, adding, “Promises made, promises kept.”

The government restricts the sale of ethanol gasoline during summer months out of concern that burning more of it in hot weather contributes to smog. But lifting the ban will help farmers deeply worried about the falling prices of corn and soybeans, which are commonly used in fuel production.

Trump made the argument that his renegotiated trade deals with South Korea and with Mexico and Canada will be good for farmers and the country.

But he did not linger on local issues, focusing instead on the danger he said a Democratic Congress would pose. Democrats, he said, “are the party of crime” and “open borders.” If they take power in Congress, they will not only block appointees like Kavanaugh, he added, but they will also plunge the country into “poverty” and “chaos.”

“On Nov. 6,” the president said, “you have a chance to stop the radical Democrats by electing a Republican House and a Republican Senate.”