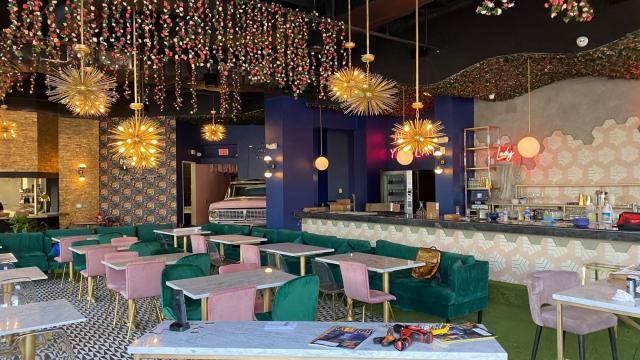 Raleigh, N.C. — An embattled Glenwood South bar and restaurants has closed its doors.

Lady Luck opened at 222 Glenwood Ave. in March, but closed days later due to the coronavirus stay-at-home order. When the restaurant reopened, one of its owners was accused of misconduct by a female customer, and former employees accused the company of non-payment.

Over the weekend, the restaurant's Instagram page was deleted. The restaurant's official Facebook page is also gone. Phone numbers listed online for Lady Luck and through company filings with the North Carolina Secretary of State's Office were no longer working as of Tuesday.

Chef Kevin Ruiz confirmed to WRAL on Tuesday that the restaurant was closed for the "foreseeable future." Ruiz, Balu Torres and beverage director Megan Corbally were the original owners of Lady Luck. Torres sold his stake in the company to a silent partner last month following accusations of sexual misconduct.

On July 2, a woman, who asked her name not be used in this story, posted a review on Lady Luck’s Yelp page detailing accusations involving Torres. She has since removed the post.

The woman said the incident occurred June 13 following a night of drinking at Lady Luck. The woman said Torres offered her free shots throughout the night and later invited her and friends to an after-party.

“We pull up to a big house. I thought everyone else was going to arrive. The last thing I remember is me taking another drink or shot,” she said.

The woman said it was just her and Torres at the home, located at Rodessa Run in Raleigh.

The woman said she vaguely remembers oral sex while at the home.

The next morning, the woman said she woke up naked in a bedroom on the third floor of the home. She said she had a sharp pain in her inner thigh that a month later continued to cause her pain.

The woman said Torres was not at the home when she woke up, but another man was. She said the man told her that was his home and Torres had gone to work early. He told her that her clothing was downstairs in the living room.

The woman said she got dressed and called a Lyft to pick her up. She said she didn’t go to authorities or to the hospital for evaluation. She also said she never told anyone else about what happened that night.

Less than a week after the Yelp post, Torres cut ties with Lady Luck, selling his portion of the business to the silent partner.

WRAL has reached out to Torres numerous times for comment but has not heard back.

The Yelp post sparked some former employees to come forward regarding wage issues at Lady Luck.

Tristen Schuster said she started working at Lady Luck a few weeks before they had to close due to the coronavirus.

"They never collected any tax documents from me," Schuster said.

When the business was closed due to the virus, Schuster said she reached out about payment and was told to come to the business to get a check. Schuster said she received a check for wages that was below what she expected. In addition, the check appeared to be a personal check written by Torres, whose legal name is Juan A. Sanchez, not from Lady Luck LLC. Torres was still part-owner at the time, the employee said.

WRAL has obtained a copy of the canceled check, which bears a signature for Sanchez and includes his name. No Lady Luck LLC info can be seen on the check.

"I asked them for an actual paycheck with taxes taken out and they said, 'Don't worry about it. Taxes are done. It's been handled,'" Schuster said.

Schuster said she noted to Edman that she was not paid for training hours. Screenshots of messages between Edman and Schuster, obtained by WRAL, show an exchange between the two involving the nonpayment.

"I will get you $150 on Tuesday - I'll either have you come grab cash or I can see how fast I can get Balu to Venmo you," Edman wrote in the text exchange.

Schuster said she was given $130 in cash from Torres.

In screenshots of text messages dated April 8 obtained by WRAL between Schuster and Edman, Schuster asked if her payments had been taxed.

"Yes we asked the accountant for the total," Edman writes.

Schuster then notes that she never filled out a tax form.

"We told her one dependent," Edman writes.

Two other workers tell WRAL that their tax forms were also not collected by Lady Luck management. One of those workers said she worked for 10 hours, in what was supposed to be a "stage shift" to see if she liked the job and wanted to work there. The woman noted that she had not expected to be working a full shift and was never paid for her hours there.

The other former employee, who asked not to be named in this story, said that she was hired in February and worked five days of training and worked a Feb. 20 pop-up event for Lady Luck. She says she was never paid. The worker claims she contacted Edman about payment but did not hear back.

On March 30, the second former employee filed a complaint with the North Carolina Department of Labor regarding the issue. WRAL has obtained a copy of an email sent to the employee confirming the filing.

In a phone call with WRAL on July 9, Edman said that all employees have been paid. She also denied allegations that the company had not collected tax forms or paperwork.

"They can’t start a shift without tax papers with paperwork," Edman said.

Edman said that all employees are paid with a company check and that only tips might come in cash form.