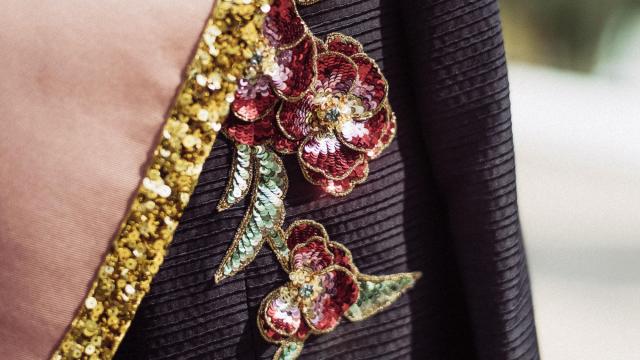 NICE, France — On a late summer afternoon, on the sloping driveway of a palatial 1920s villa high in the hills above the city of Nice, sat three large white trucks. Lining a path along its lush lawns were scores of brown cardboard boxes; rolls of Bubble Wrap were unfurled on the grass.

Inside the mansion’s underground gym, neatly laid out by a small army of Italians largely dressed in black, lay a glittering cornucopia of stage costumes, twinkling in the Côte d’Azur sunlight that beamed through the windows.

On one groaning rail were half a dozen 17th-century-style ottoman frock coats, finished with bright lapels, pearl or gold sequined trims and 3-D embroidered embellishments, including roaring cats and twisted florals, a bright white “E.J.” emblazoned on the back.

Another rack held a kaleidoscopic lineup of shiny tracksuits. There were sumptuous racks of kimonos and stacks of powder-hued Swiss cotton collared shirts, alongside rows of sneakers, pearly slippers and neon brogues.

Everywhere else there were trays upon trays of glam rock treasure: mirrored glasses with crystals in every conceivable shape and color; brooches shaped like thistles, pineapples, starfish and overflowing bouquets.

Above it all, perched on a balcony painted pale yellow, sat British singer, pianist and composer Elton John, 71, for whom all that sparkle was meant. After selling 300 million records in a career spanning five decades, John was deep in the final stages of preparation for Farewell Yellow Brick Road, a three-year, five-continent outing that will be his retirement from touring.

There will be more than 300 concerts and a traveling wardrobe of at least two dozen one-off Gucci outfits, designed by creative director Alessandro Michele for his longtime muse and idol. It will be a fitting finale for a man who always understood the power of a sequin. Give or take 10,000.

“Look, I’m not Mick Jagger, Rod Stewart or David Bowie, tearing from one end of the stage to the other,” John said, clad in an electric pink T-shirt and glasses, swim shorts and black baseball cap (all by Gucci). “I’m always bloody stuck at the piano, aren’t I? Clothes have always had to be part of the show that I put on. They made me memorable. Though I suppose with hindsight I did go totally and utterly crazy, especially in the first 30 years of my career.”

Raised in a conservative postwar household in the outer London suburbs in the 1950s, John termed himself “a late rebeller”; someone for whom the joy of dressing up only arrived in his late 20s as he emerged from the plain chrysalis of Reginald Dwight (his birth name) and refashioned himself as his own madcap musical creation, Elton Hercules John.

It was a gradual process: In the early years, the wacky glasses that later became the singer’s trademark allowed him to cover up the extreme shyness he felt as a performer.

And for all the frothy outré humor that fell out of the closet with him, whether the hot pants and fly boots created by Mr. Freedom founder Tommy Roberts in the 1970s or the feathery showgirl-inspired costumes from Bob Mackie during the 1980s, stage outfits also offered a dazzling armor against the gaze of the outside world.

“Any good costume makes you feel ready to perform. I arrive at a venue, take a nap, then wake up and pick my outfit. Then I put it on. And that’s the moment when I become Elton John” John said, looking a little tired behind his rose-tinted glasses as he stared out over the yachts moored in the Mediterranean Sea. “When I take it all off, that all disappears again. When I’m offstage I’m not Elton. To my boys, I’m just Daddy.”

Raising those boys — Zachary, 7, and Elijah, 5, his sons with his husband, David Furnish — has changed his priorities, he said. Life on the road no longer held much allure.

“I never thought I would say this. Ten years ago I thought I would die on stage. Maybe I wanted to then, but I don’t now,” he said. “I don’t want to keep getting up and flying away from the people I love for months at a time anymore. At the end of the day, I’ve been a working musician in the back of a touring van since I was 17 years old. I’ve had a bloody good run. As I sink into the latter stage of my life, I want to do things differently.”

Offstage, that may well be the case. But for his last hurrah — sartorially at least — old habits seem to die hard, judging by his tour wardrobe.

According to Jo Hambro, a former creative fashion director of British GQ and a longtime friend and stylist to John, the stage outfits are an “an 18-month passion project.”

There will be three costumes per show; the singer’s “maestro look,” which centers on an embroidered tailcoat, will open the night. Next will come a change into a bright, printed “rock ‘n’ roll” suit before a final dressing gown over a tracksuit closes the shows. The Gucci team has made John multiple options for each look of the night.

In March, Gucci introduced “Levon,” a capsule collection inspired by John’s 1971 single of the same name. It was but a short leap from there to the tour wardrobe.

“I love Elton, he’s a fantastic person, a great artist and true friend. We have the same attitude, we share the same obsession for collecting things,” Michele wrote in an email. “There has never been another pianist pop star dressed quite like him, as a sort of pop divinity, a great artist who has urged different generations of young people to look for freedom.”

For John, Michele reminded him of another great fashion friend and creative brother-in-arms: Gianni Versace, who had designed the costumes for John’s 1992 world tour, and from whom the singer bought enormous amounts of clothing. John applauded the fact that Gucci “had blown like a hurricane” through the modern fashion business and “kicked it up the backside.” He tutted at designers (Miuccia Prada among them) he felt had attempted to copy the Gucci phenomenon, rather than sticking firmly to their own vision and path.

“It’s Alessandro’s mad spirit, the lack of rules, the celebration of individuality and the fact he’s a magpie that makes me love him so much,” John said. “He’s just like Gianni: Nothing is off limits. He just spoke to me in a way no one has for some time.”

“I had actually sort of given up on vibrant, more eclectic looks,” he said. “I loved Hedi Slimane, but he only makes clothes for skinny, skinny, skinny people. I like Dries Van Noten too. And I had been wearing a lot of (Savile Row tailor) Richard James. But now I’ll wear Gucci in my daily life for as long as Alessandro is there. He’s like manna to heaven for me.”

The project began, Hambro said, with “this glorious lunch together at Woodside, Elton’s house in Windsor, picking through his mammoth costume archives, Elton’s little boys trying old outfits on, all of them just behaving like kids in a candy shop.”

John noted that he had never gotten heavily involved with the creative process behind the costumes made by any of his collaborators (prompting Furnish to let out a quiet chuckle). “I like to be surprised. I just give them the perimeters of my persona and let them do what they want to do,” John said. “I’ve never been let down yet.”

It is not like he doesn’t have other things to think about, after all. He is halfway through writing songs for a Broadway-aimed musical adaptation of “The Devil Wears Prada.” “Rocketman,” a movie about his life, starring Bryce Dallas Howard and Jamie Bell, of which he is a producer, will be released in 2019, as will a “no-holds-barred autobiography,” written with Alexis Petridis, a journalist.

And there is plenty more that he wants to do, including a book on his houses and another on his clothes. Including, presumably his final tour costumes.

“I haven’t worn a brand en masse like this since Gianni died in 1997,” John said, gesticulating to his head-to-toe Gucci. “Now I’m obsessed.”

There would inevitably be some mishaps on tour, he added, using somewhat saltier language. “But one thing I’ll tell you for absolute certain,” he said. “There won’t be any wardrobe malfunctions.”