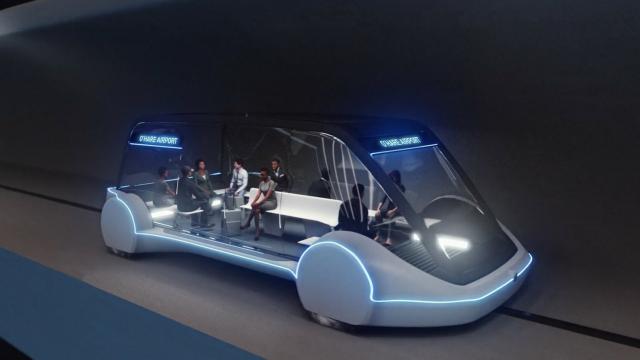 "We're really excited to work with the Mayor and the City to bring this new high-speed public transportation system to Chicago!" the Boring Company tweeted late Wednesday after reports emerged that it had been chosen.

The planned system, known as the Chicago Express Loop, will carry passengers in battery-powered vehicles through tunnels at speeds of up to 150 miles per hour. It will link downtown Chicago with O'Hare International Airport.

According to the Boring Company's website, its service will cut the journey time to 12 minutes, which would be "three to four times faster than existing transportation systems" that serve the airport.

"Bringing Chicago's economic engines closer together will keep the city on the cutting edge of progress, create thousands of good-paying jobs and strengthen our great city for future generations," Mayor Rahm Emanuel said Thursday in a press release. "This transformative project will help Chicago write the next chapter in our legacy of innovation and invention."

It's unclear how long it will take for Musk's system to be built or how much it would cost. Experts have raised concerns over the financial viability of Loop transportation systems, as well as potential environmental and legal challenges.

The Boring Company says it will shoulder the financial burden of the project, which will be "100% privately funded." The city is asking it to "design, build, finance, operate and maintain" the system.

Musk's plan beat out competition from another bidder, O'Hare Xpress LLC, a consortium of investors and engineering and transit companies.

The Boring Company is already working on a Loop transportation system in Los Angeles.

Musk announced last month that it had nearly finished building its first stretch of tunnel there. He said the public will be offered free rides on the Loop service in the coming months, if the company receives regulatory approval.

The planned Chicago system will feature what the company calls "electric skates," which are vehicles based on Tesla's Model X SUV. They are designed to carry between eight and 16 passengers, or a single passenger vehicle, according to the company.

It says the skates "will be mechanically confined to a concrete track within the tunnel and operate under safety approvals issued by both federal and state agencies."