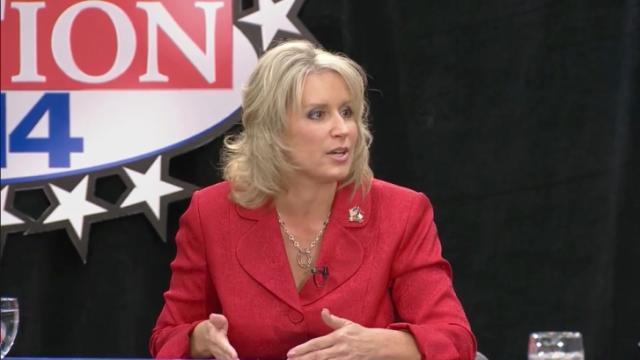 "Initially, I was looking at the candidates who had been governor," Ellmers said.

But by the time North Carolina's primary rolled around on March 15, most of the governors – other than John Kasich of Ohio – had dropped out of the race, and her constituents were buzzing about Trump.

"I didn't know I was going to be casting my vote for Donald Trump before the day of the primary," she said. "We are servants of the people. Our opinion is just that, an opinion, and we have to listen to what our constituents are saying."

Ellmers was one of several elected Republicans to meet with Trump in Washington, D.C., on Monday, and she called the meeting "very informal" and "a great discussion."

The 2nd District primary is likely to be a contest among those who have the mostly highly burnished and credible conservative credentials.

Trump took home the most delegates from North Carolina after last week's primary, capturing 41 percent of the Republican vote.

While he is popular with many, Trump has been a flash point for controversy.

Asked about an incident during a Trump rally in Fayetteville where a protestor was punched and similar incidents throughout the country, Ellmers said that those altercations were the fault of protestors, not the candidate.

"Do I believe that it's Donald Trump that's inciting it? Absolutely not," she said, calling the incidents a "very weak" attempt by liberals to undermine Trump.

During a 10-minute phone conversation Monday afternoon, Ellmers said she backed Trump in part because he was bringing new voters and new energy to the party.

"He's dedicated to turning this country around," she said. "I think, at the end of the day, Donald Trump is going to end up uniting the party."

Trump has been criticized by some in his own party for positions he has taken on topics such as imposing tariffs on imported goods, building a wall across the border with Mexico and potential treatment of terrorist suspects and their families.

Asked if there were issues where she broke with Trump, Ellmers said, "I think we should be concentrating on where we agree."

She added that no constituent has ever asked her to be perfect.

Trump has also been criticized for frequently insensitive remarks about women that have disparaged their looks and professionalism. Ellmers said she does not back those specific remarks.

"I don't condone some of the off-the-cuff comments that Mr. Trump has made," she said, but added quickly that voters don't seem to be taking notice. "They're looking at those comments and saying they are not really import right now."

She concluded, "I want to make this work. I want the next president of the United States to be a Republican, and I think he's the one to do it."