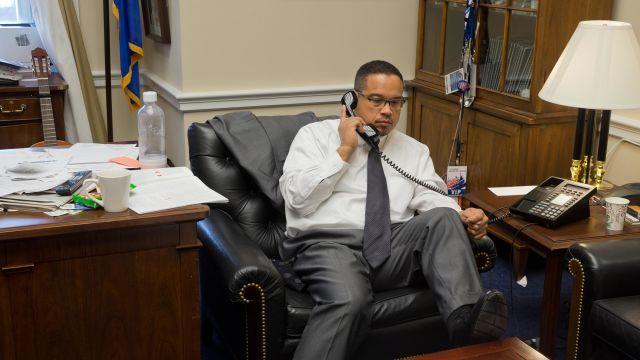 Ahead of Minnesota’s primaries on Tuesday, Rep. Keith Ellison, D-Minn., has denied allegations that he had emotionally and physically abused a former girlfriend, including once trying to pull her off a bed while yelling obscenities at her.

The allegations surfaced Saturday night in a Facebook post published by the son of the ex-girlfriend, Karen Monahan. The post referred to a two-minute video that the son, Austin Monahan, claimed showed Ellison “dragging my mama off the bed by her feet.”

The denial Sunday by Ellison, 55, who is seeking the Democratic nomination for state attorney general, was forceful. “Karen and I were in a long-term relationship which ended in 2016, and I still care deeply for her well-being,” he said in a statement. “This video does not exist because I never behaved in this way, and any characterization otherwise is false.”

In an email to The New York Times on Sunday night, Karen Monahan, an organizer at the Minnesota chapter of the Sierra Club, said that she survived what she described as “narcissist abuse” after a multiyear relationship with Ellison, the deputy chairman of the Democratic National Committee.

“It is the most difficult form of abuse to articulate,” Karen Monahan, 44, wrote in the email. “It is a slow insidious form of abuse. You don’t realize it is happening until it’s too late.”

Some details in her email about the allegations differed slightly from her son’s account. While Austin Monahan’s account described a video that he says showed Ellison pulling her off the bed, Karen Monahan described an episode in 2016 in which he “kept trying to drag me off the bed.” She did not mention a video.

Austin Monahan wrote on Facebook that his mother experienced “pure hell” during the relationship with Ellison. He wrote that he had uncovered, on his mother's computer in 2017, more than 100 messages between them that showed she had been bullied and threatened.

“There is a lot more he has done to my mom,” Austin Monahan wrote. “My brother and I were so angry and hurt for our mom. We were ready to go public but our mom begged us not to and she along with others convinced us it wasn’t in our moms [sic] best interest.”

On Monday, a spokesman for Ellison’s campaign referred to Sunday’s statement. Ellison, who lost a 2017 bid to become the Democratic National Committee’s chairman, announced in June that he was stepping down after 11 years in Congress to run for Minnesota attorney general. A representative for the DNC did not respond to a request for comment.

It was still unclear on Monday whether there would be immediate political consequences for Ellison, who has been endorsed by Sen. Bernie Sanders, I-Vt. His opponents in Tuesday’s primary had not called on him to drop out, but two of them called for an immediate response. Another said if a video exists, it should be given to the police.

A women’s advocacy group called for him to withdraw from the race.

In the email she sent Sunday to The Times, Karen Monahan said it had been “a very difficult time for me and my family” and she “was not in a place to talk.” The Monahans did not respond Monday to messages for further comment or an opportunity to review the messages and video.

Austin Monahan told the Star Tribune that he did not have a copy of the video, but stood by what he said he saw.

Karen Monahan said in her email that she started to suffer from post-traumatic stress disorder around 2014, and was in poor health when the relationship ended, a point for which they gave different dates.

“My hair was falling out, I had severe pain in my neck, back and legs,” she wrote. “My social life was suffering due to isolation, my work was slipping and it was all becoming noticeable. I became someone I didn’t recognize, on the inside or out.”

Ellison separated from his wife, Kim Ellison, in 2010, and the couple divorced in 2012 after a marriage of more than two decades.

Kim Ellison defended him Monday in an email to The Times. She said the allegations were not consistent with “anything that I experienced during the time that I have known him.”

“We may be divorced, but we are still a family,” wrote Kim Ellison, who said they met as teenagers four decades ago. “The behavior described does not match the character of the Keith I know.”

On Twitter, an account under Karen Monahan’s name wrote favorably about Keith Ellison for years. One message in July 2016 to Ellison thanked him for visiting the state’s Sierra Club chapter.

But about a year ago, the posts changed. Days after sexual harassment allegations against Harvey Weinstein became public, the account wrote a one-word message, “#metoo.”