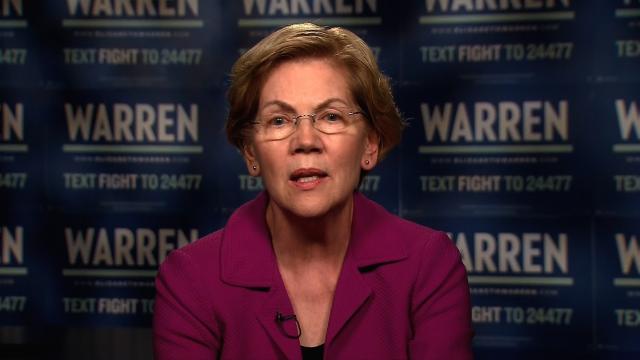 CNN — Sen. Elizabeth Warren is assessing her presidential campaign's path forward on Wednesday, one of her aides tells CNN, after a disappointing performance on Super Tuesday in which she lost her home state of Massachusetts to Joe Biden.

The defeat was a jarring and perhaps final insult to her campaign on another disappointing primary night, and presented new and immediate questions for Warren as she decides whether to continue her campaign.

With 18 states having voted by Tuesday, Warren has yet to register a win or top-two finish. Over the coming days, many on the left are likely to call for her to leave the race, hoping that her departure might boost Sen. Bernie Sanders of neighboring Vermont, her fellow progressive.

Warren's campaign manager Roger Lau sent an email to the campaign staff Wednesday thanking everyone for their work and saying bluntly about Tuesday night: "We fell well short of viability goals and projections, and we are disappointed in the results."

Lau wrote in the email obtained by CNN that "we're still waiting for more results to come in to get a better sense of the final delegate math," and that the 2020 race has been "volatile," but added again that the team is "disappointed."

A top Democrat and Warren confidant said she deserved the time to come to a decision about her future on her own and shouldn't be pushed from the race. But the reality is clear: She has no path.

"There is no path forward for her," the top Democrat said Tuesday night. "It's beneath her to remain" in the race.

Warren's poor performance in her home state reflected a loss of support among her core groups: women, white college-educated voters and liberals.

Warren drew only around 1 in 10 female voters in Massachusetts, according to exit polls. That was significantly fewer than projected winner Biden, who led with around a third of women, and Sanders with 3 in 10.

Around 1 in 5 white college-educated Massachusetts Democrats chose Warren for the nomination -- less than the 3 in 10 who voted for Biden and 3 in 10 for Sanders.

Finally, liberal voters, who might have split between Warren and Sanders, went strongly for Sanders, around 2 in 5, followed by Biden, around 3 in 10. Around 1 in 10 liberals voted for Warren.

As in other states, Biden carried moderates and those older than 65 in Massachusetts.

There had been signs in late February that Warren could finish behind Sanders, but she ultimately placed third.

There is a debate over who would benefit more from her potential departure. Her more progressive supporters would likely break for Sanders, but large parts of her mainly white, college-educated base could also turn to Biden.

Warren has not publicly signaled her intentions. On Tuesday night, her campaign sent out a fundraising email urging backers to wait for a fuller picture of the results, which could yet show her collecting a sizable number of delegates.

Warren's vulnerability in the Bay State became painfully clear over the weekend, when Sanders doubled down on his campaign efforts in the state and held a rally on Saturday that drew more than 10,000 supporters to the Boston Common.

Warren rarely led in polls of Massachusetts during the campaign, save for a spike around the time in the fall of 2019 when she briefly emerged as the primary's front-runner.

As Super Tuesday approached, Warren's prospects in her home state came into sharper relief. Sanders appeared poised to win or come in a close second. When the results rolled in on Tuesday night, the depth of her troubles became increasingly clear: Not only was she trailing Sanders, but a resurgent Biden had leapfrogged them both.

Asked if she considered her home state a "must-win" at a CNN town hall in Charleston, South Carolina, late last month, Warren demurred -- and began to talk about her come-from-behind victory in 2012, when she unseated a Republican incumbent in the Senate.

Pressed to answer the question, Warren again passed up the chance to give a direct answer.

"I'm just grateful to those folks," she said, "always grateful."

Sanders narrowly lost Massachusetts in 2016 to Hillary Clinton. In that cycle, he sought to tap into the state's progressive grassroots -- at the time energized by Warren. This time around, they both fell short of Biden.