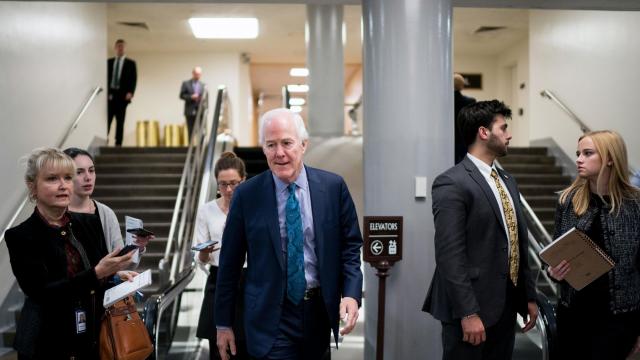 WASHINGTON — Influential Republican senators, working in concert with the White House, are making a last-ditch effort to pressure Sen. Mitch McConnell of Kentucky and other party leaders to take up a bipartisan criminal justice bill at risk of being shunted aside in the rush to complete other business before Congress adjourns.

With roughly two weeks remaining, senators and outside groups arguing for sentencing and prison law changes included in the bill, known as the First Step Act, have all but accused Republican leaders of underrepresenting the bill’s support to justify not allowing a vote. Supporters have additionally raised the possibility of attaching the long-sought changes to a must-pass year-end spending bill if leaders do not relent.

“There are a lot of people who don’t want this bill to come up, and they are using the whip organization to accomplish their goals,” said Sen. Chuck Grassley, R-Iowa, chairman of the Judiciary Committee and the bill’s lead author, referring to the formal apparatus responsible for measuring support in the Senate. “But I know what I know.”

One of Grassley’s allies, Sen. Mike Lee, R-Utah, said Thursday that he had secured firm commitments of support from at least 28 Republicans, more than half the caucus, and from all 49 Senate Democrats — well over the 60 to 70 votes party leaders indicated would be necessary for consideration. But Republican leaders insist that their own vote counting shows substantially less support, and that as long as they do not have a majority of Republicans on board, they will not advance a bill with far-reaching implications for the nation’s criminal justice system.

The increasingly public dispute is all the more charged because of its rarity: The Senate, at least under the leadership of McConnell, has grown unaccustomed to interparty policy fights. In this case, a group of vocal conservatives in the Senate allied with the National Sheriffs’ Association is facing off against a cohort of supporters of the bill that includes senior Senate Republicans, Democrats, a Republican House speaker and President Donald Trump.

Sen. John Cornyn of Texas, the No. 2 Senate Republican, who is formally tasked with assessing support within his caucus, bristled at any suggestion that he was putting his thumb on the scale.

“Well, we only have one whip,” Cornyn said Thursday. “It is amazing what senators will tell colleagues sometimes and then when they talk to the whip and we say, ‘We are shooting with real bullets here now, we need to tell the leader where people are,’ then sometimes there is a little more nuance to it.” Cornyn has told associates that his count found firm supporters to number only in the teens, with others leaning toward yes, people familiar with the comments said, a figure similar to the number of Republicans who publicly support the bill.

He told reporters Thursday that there was still time to act and that he had urged the White House to consider making a set of changes proposed by the sheriffs group, an influential conservative organization that argues that the bill as written would allow violent criminals back onto the streets and give judges too much discretion in determining sentences.

Some senators have suggested that there is a potential deal to be had between the bill’s authors and critics if the authors are willing to remove a key provision expanding safety valves that allow judges to go around mandatory minimum sentences in some cases.

“There is a path forward, and I would like to see us get it done,” Cornyn said.

Grassley said that his office was weighing such changes, working with wavering Republican senators and the White House to make adjustments. Other law enforcement groups, including the Fraternal Order of Police, support the bill.

Grassley has declined to detail any changes. But several appeared to be designed to limit the types of offenders who would be eligible for early release credits under the law, according to a Republican official familiar with the drafting process.

Broadly speaking, the First Step Act is intended to begin to unwind many of the tough-on-crime federal policies put in place with the support of both parties in the 1980s and 1990s. It would expand programs in federal prisons to keep inmates from reoffending after release and expand early release credits.

The bill would also make four changes to sentencing laws, including shortening mandatory minimum sentences for some nonviolent drug offenses, expanding the safety valve and extending retroactively a reduction in the sentencing disparity between crack and powder cocaine signed into law in 2010.

But influential outside advocates said they saw something else at work: an effort by Cornyn and other Republicans to run out the clock and avoid formal consideration altogether.

“Everything he is doing indicates he is being an obstructionist,” said Jason Pye, vice president of legislative affairs for FreedomWorks, an influential conservative advocacy group. “I don’t believe him, that’s the problem. I don’t think anybody who is a stakeholder on this issue believes him.” Holly Harris, executive director of the Justice Action Network, a bipartisan coalition in favor of the changes, likened the secretive whip process to a game of “eighth-grade telephone” that amounted to delay tactics.

The House speaker, Paul Ryan of Wisconsin, considered pre-emptively passing the legislation in the House as a way to pressure Senate leaders to take action but ultimately ruled it out, according to people familiar with private strategy discussions. Ryan, who is retiring at the term’s end, has repeatedly pressed McConnell in private to act on the legislation.

Senior White House officials, for their part, have continued to target individual senators. At Republicans’ weekly policy lunch last week, Vice President Mike Pence framed the legislation as a top priority of Trump’s and an opportunity for a big bipartisan win. He echoed claims made by proponents that if senators do not pass the compromise this year, they will be sent back to the drafting table, perhaps indefinitely, come January, when Democrats take control of the House.

Those efforts, though, appear to have made little impact on a small but forceful group of conservative Republican senators who are fighting the changes. Even proponents of the bill concede that though Trump has made calls and sent tweets promoting the issue, he appears to have little attachment to the outcome, minimizing the risks for fellow Republicans who cross him.

Opponents argue that the bill would free dangerous criminals and expose Republicans to accusations that they are weak on crime. These senators, led by Tom Cotton of Arkansas, have worked closely with the sheriffs to build their case. And at the same luncheon where Pence advocated swift passage, Cotton warned that a vote on the bill could lead some Republicans to lose their seats.

Cotton expressed confidence Wednesday that the bill would not receive a vote.

On the other side, Lee said he believed he could add five to 10 or more Republican yes votes if the changes under consideration were ultimately made. But he said the work would have to be done quickly.

“While there is more than enough time to do it, I think in order for this to move it has to either be voted on or scheduled for a vote within the next week or so,” he said.