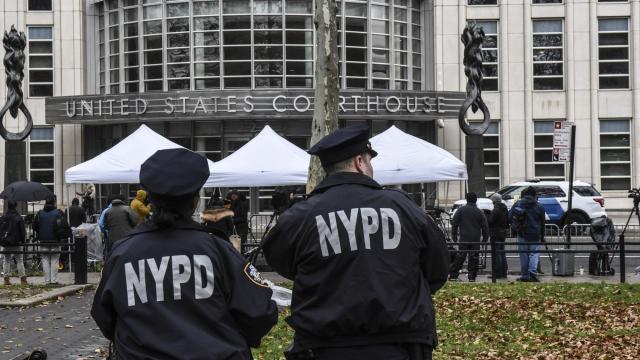 NEW YORK — A former operations chief in the Sinaloa drug cartel testified on Tuesday that he had personally bribed one of Mexico’s top law-enforcement officials, meeting with him twice in a restaurant, each time delivering a briefcase stuffed with at least $3 million in cash.

The bribes were allegedly paid to Genaro García Luna, an architect of the militarized crackdown on drug cartels that led to thousands of deaths under former president Felipe Calderón.

The testimony suggesting that cartel bagmen had access to the highest levels of Mexico’s criminal-justice system came from Jesus Zambada Garcia, who has spent four days spilling the cartel’s secrets as a witness in the federal government’s case against Joaquin Guzman Loera, the drug lord known as El Chapo.

In 2005, when Zambada said the first payoff occurred, García Luna was in charge of the Federal Investigation Agency, Mexico’s federal police force equivalent of the FBI. The following year, when he was accused of taking a second bribe, García Luna had been appointed the country’s secretary for public security.

Besides testifying about cash payments to García Luna, Zambada told the jury about another multimillion-dollar bribe he paid in 2005. That one, he said, went to a top security official who had worked under Mexico’s president-elect, Andrés Manuel Lopéz Obrador, when Lopéz Obrador was the mayor of Mexico City.

Guzman’s lawyers elicited the testimony about the bribes during cross-examination as part of their effort to persuade jurors that Guzman was the victim of a conspiracy involving high-level government officials in Mexico and American drug agents.

While Zambada has figured heavily in the government’s case so far, his brother, Ismael Zambada García, who the defense alleges ordered the bribes to be paid, has been central to the defense’s strategy.

Ismael Zambada, known as Mayo, was Guzmán’s longtime partner in the Sinaloa cartel. The defense contends that it was Zambada who controlled the cartel and that he had for years framed Guzmán with the help American drug agents and corrupt Mexican politicians, among them, two of the country’s presidents.

In court on Tuesday, a defense lawyer tried to get Zambada to provide more information about the ties between Lopéz Obrador and the security official. Federal prosecutors immediately objected, and Judge Brian M. Cogan shut down that line of questioning.

All of this took place as the courtroom audience was waiting for Zambada to testify about paying off a Mexican president. That expectation had been created last week after reporters saw a transcript of a sidebar Cogan held with prosecutors and defense lawyers.

At the sidebar, the defense revealed a potential bombshell: that Zambada had previously told the authorities that he had paid “the now incumbent president of Mexico” at least $6 million in bribes. The defense asked for permission to bring that information out in open court.

But hours before Zambada appeared for his final day of testimony, the government filed a motion under seal “to preclude cross-examination.” The secret motion prompted another lengthy discussion out of the jury’s hearing on Tuesday afternoon, the transcript of which was also sealed.

It was only after that sidebar discussion ended that Cogan shed a little light on what was going on in private. Ruling from the bench, he announced he was going to limit the questions that Guzmán’s lawyers could ask Zambada.

He said the value of the information that might be learned from a broader cross-examination did not outweigh, as he put it, “protecting individuals and entities who are not parties to this case and who would face embarrassment.”

Who those people and entities were remained unclear. But when Zambada took the stand again to finish his testimony, Guzmán’s lawyers were only allowed to ask vague questions about bribes to presidents. William Purpura, one of the Guzmán’s lawyers, asked Zambada, for example, if he would “corrupt the president of Mexico” if he could.

The government is expected to introduce 15 more cooperating witnesses who, like Zambada, will offer an inside view of Guzmán and the cartel’s operations. The defense, meanwhile, is likely to continue to argue that Ismael Zambada is the true mastermind of the organization and to press those witnesses about the extent of corruption in Mexico’s government. But Cogan has made it clear he will put limits on how far that questioning can go.