Educators to march on Capitol in 13th 'Moral Monday' protest 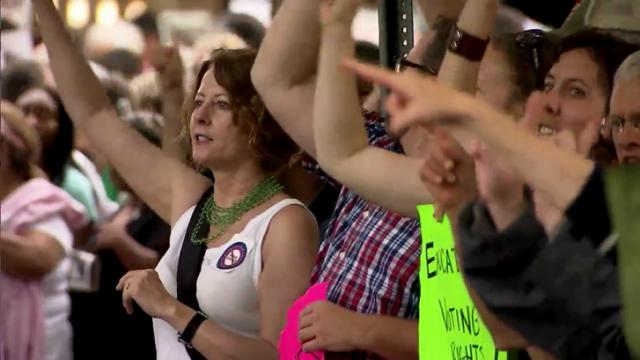 Raleigh, N.C. — The legislative session is over and lawmakers have returned home, but protesters plan a final rally Monday against the actions of the Republican-led General Assembly, which wrapped up a whirlwind session on Friday.

The North Carolina Association of Educators said public education will be front and center at the 13th and final wave of the so-called "Moral Monday" protests, which for the first time will include a march to the State Capitol.

The teachers group kept a low profile in the early weeks of the Moral Monday demonstrations, but decided it needed to take a stand against the state budget, which has been widely criticized by Democratic lawmakers and liberal groups, including the state chapter of the NAACP, for its impacts on education.

"When the budget dropped, we looked at each other and we said, 'We have go to take a stand and be there and show our dismay,'" said NCAE Vice President Mark Jewell.

Jewell, NCAE President Rodney Ellis and other members of the group's leadership team were among those arrested last week after sitting down and refusing to disperse inside the Legislative Building.

He predicted that busloads of educators would be among those who protest Monday. "We're encouraging them to wear red for public ed," he said.

The $20.6 billion spending plan provides no raises for teachers. But the NCAE is most upset with the $20 million set aside over the next two years for "opportunity scholarships" to allow low-income public school students move to private schools and the elimination of  "career status," or tenure rights, for veteran teachers.