Editorial: Will Burr make his legacy one of shining light onto truth? 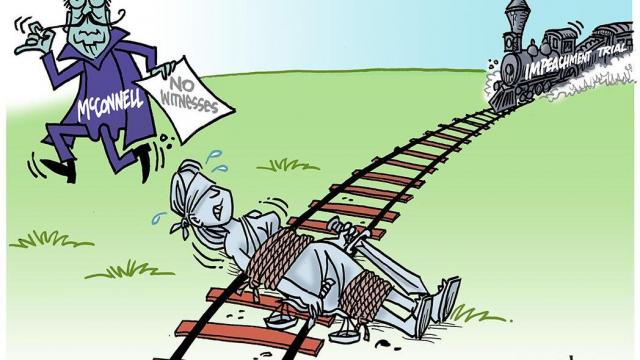 It took just minutes into President Donald Trump’s lawyers’ opening presentations for the false statements and misleading claims to start to flow.

That’s just for starters. But it shouldn’t be a surprise that they echo their boss.

The Trump presidency has been a shocking reign of error:

Of 742 statements tracked by Pulitzer-Prize winning PolitiFact, 85 percent have been rated half-true or worse. Half have been outright false or “pants on fire!”

The Washington Post’s Fact Checker has tallied 16,241 false or misleading claims in his first three years in office.

While the impeachment trial unfolding in the U.S. Senate is officially about the House’s articles of impeachment against President Trump: “Abuse of Power” and “Obstruction of Congress.”

What really is on trial is the truth. What is unfortunate is that the leadership of the Senate is making sure that there will be no discussion of the truth, no witnesses will testify who know the truth and no documents will be produced to verify the truth.

Ultimately, the defense being made in the Senate by Trump’s lawyers and backers is that truth and decency don’t matter. As long as Donald Trump is president – and cuts taxes, regulations, opposes abortion and appoints the right judges -- he can do whatever he wants.

When history judges, the verdict may be that the Senate traded partisan expediency for the permanent subservience of the legislative branch of government to the presidency. It will mark the end of our Constitution’s mandate for three co-equal branches of the federal government.

Sen. Thom Tillis, who is seeking re-election this year, stated more than a month ago that fact didn’t matter to him. “I’ve said that the whole process is flawed, it’s been unfair. I’ve read the transcript, I’ve read the whistleblower complaint. I’ve been briefed up on some of the other interviews that we’ll get more information when I sit as a juror, but I’m a definite no.

Sen. Richard Burr has certainly been true to his Republican roots and loyal to the president. But in his role as chairman of the Senate’s Intelligence Committee he has -- far more than many of his Republican colleagues – found ways to work to elevate truth and uncover facts rather than reflexively submit to deception and disinterest to protect Trump.

Through the impeachment hearings, Burr who isn’t encumbered by concerns for re-election, must put the truth, the integrity of the Senate as stressed in the Constitution’s separation of powers, as his priority over loyalty to party or to Donald Trump.

It would be naive, particularly at this juncture, to expect that the Senate might convict Trump – regardless of the facts.

But for the sake of the truth, ALL the facts, all the witnesses, all the documents should be disclosed, presented, discussed.

Burr is uniquely positioned to be pivotal to make that happen. His legacy should be casting the vote to shed sunlight on the truth.