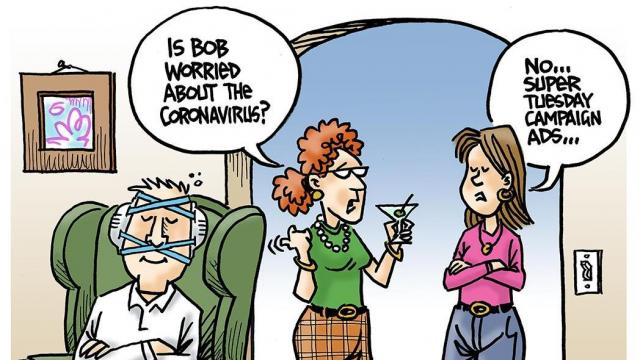 Today is the first day of the rest of the 2020 election – at least so far as North Carolina voters are concerned. This is the start of the winnowing. Today, whether a Republican or Democratic voter, the choices are as broad and diverse as they’re going to get. After today the options only get narrower.

Think about this: Voters in the 11th Congressional District casting ballots in the Republican primary choose among: three candidates for president; four for U.S. senator; 12 (yes a dozen!) for the U.S. House; two for governor; nine for lieutenant governor; three for attorney general; two for auditor; two for insurance commissioner; three for labor commissioner; three for secretary of state and two for superintendent of public instruction. That’s 45 candidates for 11 state and congressional offices. That doesn’t even include state legislative or other local offices.

Those voting in the 11th District Democratic primary are picking from 46 candidates in nine statewide and congressional races – 15 (!) for president; five for U.S. Senate; five for U.S. House; two for governor; six for lieutenant governor; two for auditor; three for agriculture commissioner; five for superintendent of public instruction and three for treasurer.

The perfect candidate may not exist among the scores on the ballot, but the variety should provide most voters with candidates well within their comfort zones.

Folks who neglect to vote now have no legitimate complaint later that they don’t like the nominees. Governing is not a spectator sport and today is the chance for everyone to get in the game.

Don’t think you’ve got skin in this game? If you have kids, if you travel on a highway, if you visit a public park, if you have a drivers license, use the internet, go to a hospital; have kids in school … well you get the idea.

Choices are particularly critical in statewide and legislative races. Support for key state institutions and initiatives have stagnated or slipped in the last decade. Voters need to pick candidates who will work to reinvigorate the state, demand excellence and provide the resources to make it happen.

Regardless of political affiliation, North Carolina needs candidates who will support:

Choices don’t get any better than they are today. The polls open at 6:30 a.m. and remain open to all those online to vote at 7:30 p.m. You can locate your polling place here.

Don’t leave it to others. Vote today to pick the candidates you’ll see listed on your Nov. 3 ballot.