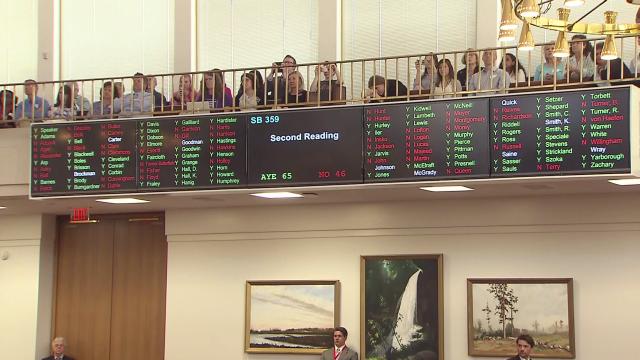 Gov. Roy Cooper needs to veto the “abortion survivors protection act” and that veto should be sustained. The bill is unnecessary. It stigmatizes and shames doctors and their patients.

After moving quickly through the state Senate it was rushed before the House of Representatives and passed in minutes – without even perfunctory committee review.

This bill doesn’t protect the lives of anyone who isn’t already protected under current law. INFANTICIDE IS AGAINST THE LAW.   If a baby is born alive, no matter the circumstances, doctors must take all appropriate measures to preserve that life. It is already a crime to kill a baby.

Any doctors that do it violate the law, their medical ethics and go to jail. That is what happened to the sole example backers have used to promote this superfluous bill.

Current law works. The sponsors of the bill, Joyce Krawiec, R-Forsyth; Ralph Hise, R-Mitchell and Kathy Harrington, R-Gaston know this. While they’ve offered up highly emotional rhetoric, they’ve distorted reality and failed to provide a bit of evidence that this is going on in North Carolina or even had gone on in recent memory. One of the bill’s backers, Rep. Pat McElraft, R-Carteret, DECADES AGO early in her career, claimed to have “been witness to the results of those late-term abortions.” She offered no proof but plenty of gruesome anecdotal descriptions.

This legislation is not based in medical reality or truth. It is being rammed through the legislature as a wedge issue to agitate a political base. President Donald Trump says there should be “punishment” for women who have abortions.

That is not the mainstream view. Less than a year ago 71 percent of the nation’s registered voters said they opposed overturning Roe v. Wade, the 1973 U.S. Supreme Court decision that make abortion legal during the first three months of pregnancy. Only 23 percent supported reversing it. We support current law.

For those first 24 weeks – up until a fetus is viable – a woman can decide to have an abortion. After that, an abortion is permissible ONLY if a doctor determines the health of the mother is at risk by continuing the pregnancy. This is not a woman’s choice. It is a doctor’s determination of a medical necessity.

And, it is rare. Very rare.

Don’t be fooled. It’s all aimed at the creation of highly-charged political attacks. Gov. Cooper, don’t be surprised when Sen. Phil Berger says you support infanticide. We know you don’t and so does he.

But, it’s already started. “It shouldn't be hard to stand against infanticide, but House and Senate Democrats are doing just that,” said Aubrey Woodard, acting chairman of the state Republican Party, in a fund-raising e-mail distributed Wednesday.

Infanticide IS ALREADY AGAINST the law. Woodard and his fellow Republicans in the General Assembly know it.

To really stand up for children, legislators should support the expansion of Medicaid to more than a half-million needy North Carolina citizens who lack access to adequate health care. They should fully fund Pre-K in North Carolina to eliminate the backlog of children who are eligible.

This legislation is not about protecting children. It is a shameful re-election gimmick.