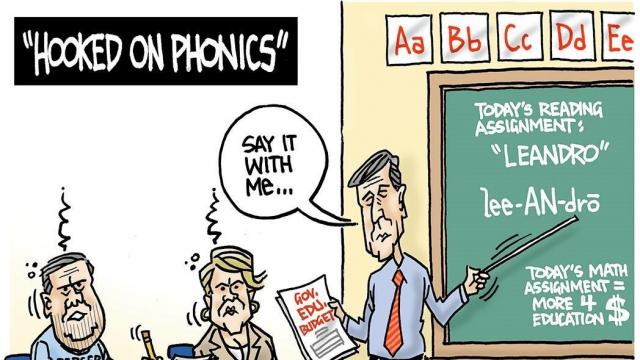 In her first opportunity since becoming state Superintendent of Public Instruction Catherine Truitt missed the mark.

She chose to take a partisan side-seat with the leadership of the General Assembly instead of standing up for the children of North Carolina and the State Constitution.

It is legislation that was introduced and passed the state Senate in three days and is most reflective of the all too familiar secretive, slap-dash, rushed approach to dealing with critical issues that clearly command a more thorough approach. Those the state serves, taxpayers, their dependents and children, deserve to know that the laws being passed are based on three days of courser consideration in the Senate.

The reality is that there is a far more comprehensive, well-thought out, approach to meeting the state education needs that Truitt has been all too silent about but should be at the forefront of her education agenda.

She should be in the forefront – out ahead – in pushing the legislature to adopt the comprehensive plan that has been developed by bringing together the various parties in the Leandro court case in to meet the State Constitutional right to give every child access to a quality education.

There’s nothing secret about the Leandro plan. It was put together through a court order and overseen by Superior Court Judge David Lee. It has had a very significant public airing, subject to review by the defendants including the State Board of Education and the plaintiffs – the students who have been denied access to a quality education and the several local school boards.

The public knows the details of the reports and plans – they are a matter of public record as a part of the court’s proceedings. It represents a consensus and workable approach. The court has provided the legislature with the cost of its plan (really, it is a court order) -- about $427 million for the first year of the eight-year plan.

Truitt, former classroom teacher and career educator, should as much as anyone see the obvious wisdom and workability of the Leandro plan. She should be, and needs to be, its biggest promoter.

Instead, she is promoting a reading program that does not appear to be the result of a focused, transparent and through examination of reading instruction in North Carolina’s schools. There’s no indication of any effort to gather information about what works and what doesn’t in the state’s classrooms. There’s been no testimonials from those who know most about it – the state’s classroom teachers, reading instructors and other educators – about just what needs to be done.

Before Berger’s legislation goes through the state House of Representatives and on to the governor, there is a much-needed detour. Legislators should demand to know, in detail, the origins of Senate Bill 387 – who was consulted, how it was drafted and what research went into its drafting. Further, legislators and the public need to hear from educators, reading experts and others, about best-practices when it comes to teaching reading and to what degree the Senate’s plan meets, or misses, them.

More significantly they should strip the content of the bill, it is a favorite tactic of legislative leaders in recent years, and replace it with the Leandro plan. That is one that will REALLY move education forward.

If Catherine Truitt seeks to be seen as the state’s education leader, the route isn’t via reflexive partisan fealty.

Stand and deliver a quality of education for EVERY child. Show loyalty to the State Constitution. Push for enactment of the Leandro roadmap. Bring first-class schools into every corner of the state.