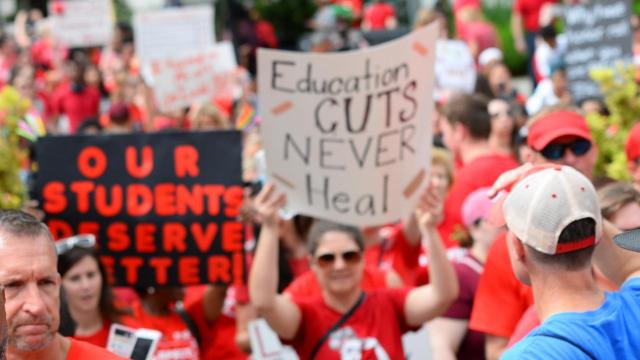 CBC Editorial: Wednesday, May 1, 2019; Editorial #8416
The following is the opinion of Capitol Broadcasting Company

To follow the torrent of hyper partisan, name-calling attacks flowing out of state Senate leader Phil Berger’s office, it might be easy to confuse North Carolina’s public school teachers for the killer zombies of ‘Game of Thrones’ or invaders from outer space.

They are not. It’s no joke. Lest Phil Berger, House Speaker Tim Moore or state Superintendent of Public Instruction Mark Johnson be confused, these dedicated and hard-working teachers are their employees. Their priority is the success of North Carolina’s public school children – NOT a boost to partisan candidates in the next legislative election.

Teachers are coming to Raleigh today, by the thousands, because they don’t trust you, their bosses. They know, because they are teachers who understand facts and recognize when they are twisted to misrepresent reality, that public education is being short-changed.

They want you to listen to what they know is really going on in public schools. They want you to understand that they cannot do their job because you are not providing them with the resources to excel.

While Berger and his fellow legislative leaders seek to portray the teachers' requests as partisan, that is simply not the truth. It is Berger and his allies who are on a desperate, and obsessive quest for partisan advantage.

What is unreasonable, excessive or partisan -- as Berger falsely attempts to portray in news releases -- about adequately staffing public schools with librarians, nurses, social workers and mental health professionals?

While we’re at it, what is unreasonable, excessive or partisan about:

Nothing. And our legislature’s leadership knows it.

If education, a “right” guaranteed in North Carolina’s Constitution, is a priority then there’s nothing unreasonable. In fact, the state’s courts have already ruled that the legislature’s been in violation of the constitution for its underfunding of public education.

Blinded by partisanship, legislative leaders shortchange public schools in favor of huge and unnecessary cuts in corporate taxes – that even today continues unabated.

Voters need no more illustration than the penny-pinched education budget the state House of Representatives is poised to approve.

Our public school students and teachers deserve better resources than their current bosses in the General Assembly provide.

The voters – the shareholders who entrust operation of their state to members of the legislature – deserve better management.

Those shareholders will get to cast their proxies in 2020. Regardless of political affiliation, they’ll vote for those who are dedicated to building a top quartile public education system. The teachers know that is not happening now.