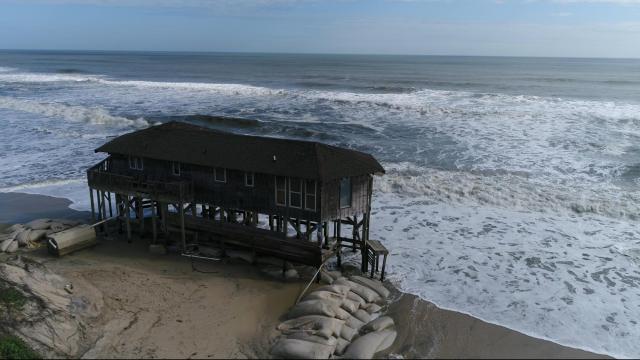 It is time for North Carolina legislators to get their heads out of the sand. The deniers may not like it, but facts are facts. The sea level along our coast is rising. The legislature’s efforts to recast and avoid addressing this critical issue for the future of our coast will make solutions more costly and put communities at risk.

“Sea Change,” a documentary that premiered Tuesday on WRAL-TV, presents the reality of sea level rise; examines risks and impacts; explores how some communities are adapting; and how it will change a $1.2 billion coastal tourism economy, wildlife habitats, agriculture and community growth along the state’s 300-mile coast.

The evidence presented shows the need for the legislature to repeal the 2012 “Coastal Management Policies” law (H.B. 819). It is a rightly ridiculed law that does more to protect real estate interests than provide for proper management of coastal communities, vacationers or the environment. Legislators, and anyone else, can see the documentary by clicking here.

Coastal residents acknowledge sea level rise is changing their communities and their lives with stronger storm surges, more frequent flooding and saltwater intrusion into farmlands. A two-foot sea level rise – about the middle of estimates by the end of the century -- would inundate most of the Outer Banks.

Communities up and down the coast, on their own, are taking action.

In Swan Quarter, the Hyde County seat, dikes block the sea water, pumps move it and homes are lifted higher above it. Erosion related to sea level rise has cost Nags Head rows of houses.

Without recognition that the situation is serious and taking significant action, things will only get worse.

A storm the scope of 1954’s Hurricane Hazel, one of the most destructive in North Carolina history, today would produce a surge five to 10 inches higher. Just a few inches is the difference between a flooded house and staying dry. Another storm the force of Hazel would threaten even more lives and spread damaging floodwaters over a far wider area.

Ignoring scientific evidence, failing to adapt and prepare now, puts lives and livelihoods at risk. While some coastal communities are working to address the inevitable, the state legislature and others continue to ignore the science and evidence around them.

In 2012 the legislature passed a law prohibiting coastal communities from using data from a state science panel report that included projections for sea level rise out to 2100. The panel was ordered to produce a revised report with only 30-year projections. “That of course makes the projections look less dire,” said Stan Riggs, a coastal geologist and member of the panel.

While the legislature has been aggressively reluctant to address this issue, communities aren’t waiting. N.C. State University Professor Mike Burchell is working with farmers to develop ways to fight salt water intrusion into their fields. Communities are developing and updating flood guides and FEMA’s flood insurance program provides grants to help pay to elevate homes.

Not only does this kind of effort make homes safer, it drops homeowner annual flood insurance rates thousands of dollars a year.

Regardless of legislative stubbornness, the forces of nature won’t relent.

Geologist Riggs clearly presents the choice: “What do you want with this coastal system? If we are smart, we can learn to live with it. But we have 127 miles of barrier island beaches that are looking for sand right now in order to have a summer economy. The average cost is $3 million a mile.”

Rather than manipulating science to present rosier outlooks and forestall the inevitable, North Carolina regulators and communities need the best scientific information, effective planning tools and resources to assess vulnerability and develop long-range plans and policies to adapt to the changing coast.

The issue isn’t about liberals or conservatives. It is about science. Legislators must take more affirmative steps to protect our citizens and coast. Denial, stalling and playing to real estate special interests doesn’t solve the problem.