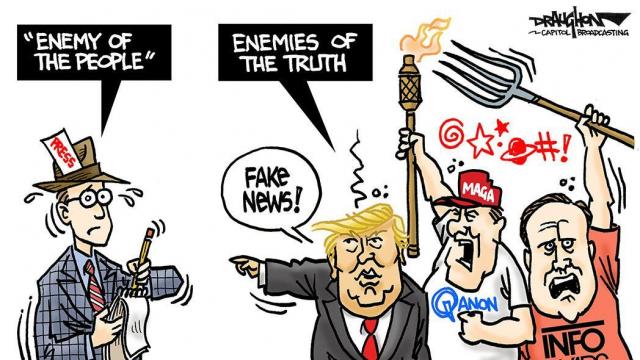 EDITOR’S NOTE: Today’s editorial and editorial cartoon are part of the #EnemyofNone effort initiated by The Boston Globe to run editorials upholding press freedom amid President Donald Trump’s attacks on the news media.

No one on the planet should be more thankful for the First Amendment freedoms, particularly “of the press,” that Americans enjoy than President Donald Trump.

Reporters, hourly, dutifully magnify his mean-spirited Tweets. The news media accurately broadcasts his cynical taunting of reporters at his rallies as he baits his supporters and then as those crowds physically intimidate and threaten the correspondents.

Donald Trump relies on a free press to turn reporters into a punching bag for his reality-show presidency. The reflexive hyper-coverage of Trump’s campaign helped get him elected president. Maybe it makes good television, but it makes for awful government.

The news reporters who cover the president and his administration don’t deride him as “fake.” They don’t declare him an “enemy.”

What they do is point out when he doesn’t tell the truth. They shine a light when he is deceitful. They challenge him when he shades reality and treats people in demeaning and spiteful ways.

When a president lies and misleads – as Donald Trump has done 4,229 times in 558 days since going into office (that’s once nearly every eight hours) – the fake in “fake news” isn’t of reporters’ doing.

While the news media provides the president with an incomparable microphone, the constant attention of the press also forces the kind of accountability for statements and actions that Trump abhors. He acts as if he is responsible to no one, his edicts are beyond scrutiny. Anyone who holds him to account becomes an “enemy of the people.”

While Trump may not like it, America and much of the press corps that covers him is made up of citizens, not subjects or serfs.

Be assured there is no expectation, at least from here, that the president – or any president, governor, legislator or city council member – likes everything or anything the news media reports. But the vitriol and inciteful language directed toward the press from the president goes beyond criticism or dissatisfaction.

“Journalism provides something unique to a culture – independent, reliable, accurate and comprehensive information that citizens require to be free,” wrote Bill Kovach and Tom Rosenstiel in “The Elements of Journalism.”

But he does have to respect – as president of a nation founded on a principle of press freedom – the work they do. Journalists, no less than anyone else in the president’s universe, are patriots and not enemies.