Editorial: The election must determine next Supreme Court nominee 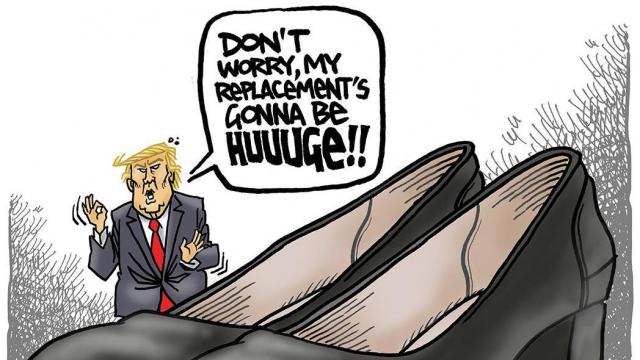 Trust and truth aren’t big words. But given the latest comments from our president, North Carolina’s U.S. senators and a senator from our neighbor to the south, they are in short supply. What is the truth? What they said in 2016 or what they are saying today? The jury of public opinion should not have a tough time with reaching a verdict.

It is more about election expediency than keeping your word. Donald Trump demands he needs a new Supreme Court justice on the bench to win the election. Senate Republicans – Thom Tillis, Richard Burr and South Carolina’s Lindsay Graham most prominently -- abandon their principles and dutifully comply. Tillis fears any act of consistency will hurt his support among the GOP base. Perhaps Burr fears failure to go along might result in the Justice Department turning up the heat in the FBI investigation into his questionable stock trades earlier this year?

See, hear and read what they said about taking action on President Barack Obama’s nomination of Merrick Garland to the Supreme Court in 2016 and what they now are saying about filling the high court vacancy after Justice Ruth Bader Ginsburg’s death.

Thom Tillis was unequivocal in the spring and summer of 2016 in denying a hearing, or even a vote, on Merrick Garland, President Barack Obama’s nominee for the high court. Tillis broadcast it in an address to the annual meeting of the Conservative Political Action Conference that March. “We’re not going to nominate a Supreme Court Justice until the people have spoken.,” he said. See for yourself.

A few months later he took to the pages of USA Today in an op-ed to add emphasis. “This is about principle, not the person whom President Obama has nominated to fill the vacancy. That is why the Senate will be keeping its promise to give the American people a voice,” Tillis wrote. Just read it.

Where does Tillis stand today. It’s a dizzying about-face. His 2016 demand that the “voice of the people” determine who picks the next Supreme Court Justice evaporated in 2020. “There is a clear choice on the future of the Supreme Court between the well-qualified and conservative jurist President Trump will nominate and I will support and the liberal activist Joe Biden will nominate,” Tillis said after Ginsburg’s death.

As a bit of a reminder: As Tillis and most North Carolina voters are aware, the people are “speaking” right now. More than 153,000 mail-in ballots already have been cast while more than 950,000 voters have requested ballots.

In 2016, Sen. Richard Burr was unequivocal. “The American people deserve a voice in the nomination of the next Supreme Court Justice,” he declared via Twitter on March 16. “This appointment could easily tip the balance of the court in a direction not supported by the American people as evidenced by 2014’s election results giving Republicans both the Senate and the House.”

Six years later, after nearly 3 million more people voted for the Democratic candidate for president than the Republican, and voters handed control of the U.S. House of Representatives to the Democrats, Burr has changed his tune.

“The President has every right under the Constitution to nominate the individual of his choosing to fill the current Supreme Court vacancy,” Burr said in a statement Tuesday. "The Senate’s role is to provide its advice and consent." Burr added that, “in this instance, unlike 2016, Americans voted to ensure the Senate and Presidency are both held by the same party … “I believe the Senate should consider President Trump’s nominee as early as possible and I intend to carefully review their qualifications once that individual is named.”

President Donald Trump, when he was candidate Trump in 2016, didn’t want any rush filling the high court vacancy. “I think the next president should make the pick, and I think they shouldn’t go forward, and I believe I’m pretty much in line with what the Republicans are saying,” Trump said.

Here’s what the 2016 Republican Party Platform said: “Only a Republican president will appoint judges who respect the rule of law expressed within the Constitution and Declaration of Independence, including the inalienable right to life and the laws of nature and nature’s God, as did the late Justice Antonin Scalia. We are facing a national crisis in our judiciary. We understand that only by electing a Republican president in 2016 will America have the opportunity for up to five new constitutionally-minded Supreme Court justices appointed to fill vacancies on the Court.” 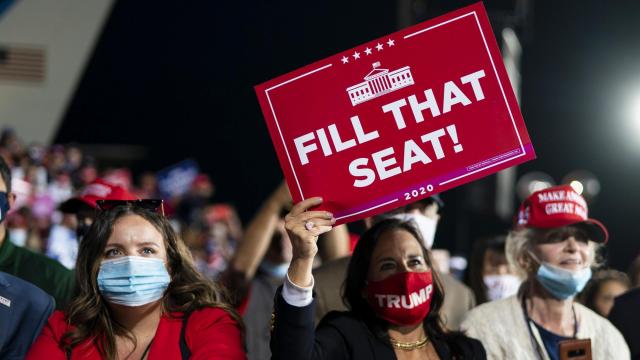 There is no 2020 GOP platform. But there are Trump’s statements and tweets on his evolving view. “We won and we have an obligation as the winners to pick who we want,” Trump told reporters Saturday as he departed for a rally in Fayetteville. “That’s not the next president. Hopefully, I’ll be the next president. But we’re here now, right now, we’re here, and we have an obligation to the voters, all of the people, the millions of people who put us here.”

No one has offered up a more direct challenge to voters to judge his integrity than South Carolina Sen. Lindsey Graham – who as Judiciary Committee chair will oversee any hearings on a Trump court nominee. Four years ago Graham told his committee: “I want you to use my words against me. If there’s a Republican president in 2016 and a vacancy occurs in the last year of the first term, you can say Lindsey Graham said let’s let the next president, whoever it might be, make that nomination. And you could use my words against me and you’d be absolutely right."

Just as recently as October 2018, Graham told The Atlantic's Jeffrey Goldberg: "If an opening comes in the last year of President Trump's term, and the primary process has started, we'll wait till the next election."

Now, Graham has a new tune. "I will support President @realDonaldTrump in any effort to move forward regarding the recent vacancy created by the passing of Justice Ginsburg," Graham said in a Saturday tweet.

What do North Carolina voters think? It just so happens that The New York Times/Siena College Poll asked them last week. They said they trust Joe Biden with picking the next Supreme Court justice more than they do Trump – 47% to 44%.

Election expediency – that’s what it’s about. Tillis and Burr should acknowledge they initially spoke in haste, reverse themselves and be true to their 2016 vows. The next president should determine the nominee for Supreme Court Justice. Unless Trump wins re-election, they should ignore any nominee he proposes. Don’t be rubber stamps. Do your job, senators.