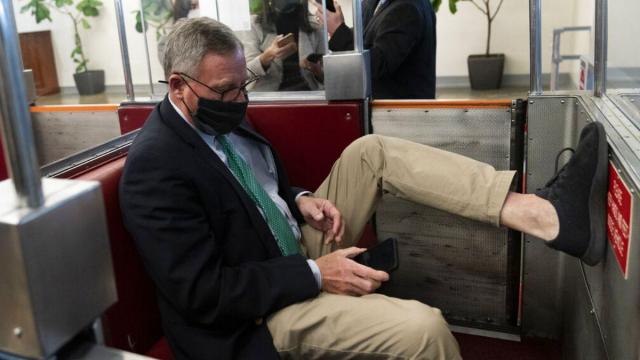 There are infinite excuses for doing the easy and wrong thing. Doing the difficult but right, correct and proper thing is the solitary justification.

It took Republican Sen. Thom Tillis, who voted against convicting Donald Trump of inciting insurrection, 692 words to justify his action.

Republican Richard Burr, North Carolina’s senior senator, voted to convict Trump and needed slightly more than half that to explain his decision.

Tillis took the easy way out. He let Donald Trump off the hook for the insurrection he promoted and Tillis let the Senate and the nation down.

Burr acted with principle and courage. Given the volatile times, the vengeful bullying of the ex-president and the unhinged nature of too many these days, we have little doubt that Burr will now face undeserved and unwarranted condemnation, threats and intimidation. Burr knows that – and knew it before he voted.

Unlike 43 of his colleagues, Richard Burr left the Senate floor Saturday afternoon with a clear conscience. He doesn’t have to hedge or equivocate. He stood for the Constitution, the truth and the facts.

He showed the integrity and independence he promised the North Carolinians who sent him to Washington.

Here is the statement Burr issued after his vote Saturday afternoon:

“January 6th was a grim day in our nation’s history. The attack on the U.S. Capitol was an attempt to undermine our democratic institutions and overrule the will of the American people through violence, intimidation, and force.

“Seven lives were tragically lost as a result of that day. Law enforcement officers, outnumbered and overwhelmed, sustained debilitating injuries as they bravely defended Congress against an angry mob. We now know that lawmakers and congressional staff came dangerously close to crossing paths with the rioters searching for them and wishing them harm.

“When this process started, I believed that it was unconstitutional to impeach a president who was no longer in office. I still believe that to be the case. However, the Senate is an institution based on precedent, and given that the majority in the Senate voted to proceed with this trial, the question of constitutionality is now established precedent. As an impartial juror, my role is now to determine whether House managers have sufficiently made the case for the article of impeachment against President Trump.

“I have listened to the arguments presented by both sides and considered the facts. The facts are clear.

“The President promoted unfounded conspiracy theories to cast doubt on the integrity of a free and fair election because he did not like the results. As Congress met to certify the election results, the President directed his supporters to go to the Capitol to disrupt the lawful proceedings required by the Constitution. When the crowd became violent, the President used his office to first inflame the situation instead of immediately calling for an end to the assault.

“As I said on January 6th, the President bears responsibility for these tragic events. The evidence is compelling that President Trump is guilty of inciting an insurrection against a coequal branch of government and that the charge rises to the level of high Crimes and Misdemeanors. Therefore, I have voted to convict.

“I do not make this decision lightly, but I believe it is necessary.

“By what he did and by what he did not do, President Trump violated his oath of office to preserve, protect, and defend the Constitution of the United States.

“My hope is that with today’s vote America can begin to move forward and focus on the critical issues facing our country today.”