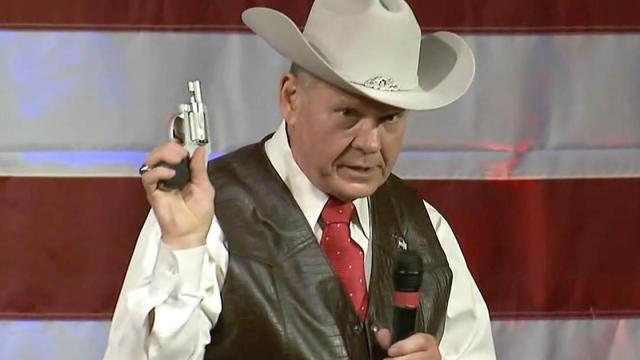 What happens when only 8 percent of a state’s voters pick a political party’s nominee for the U.S. Senate?

Roy Moore. The former twice-removed, chief of the Alabama Supreme Court may have fought for a monument of the 10 commandments inside the state’s judicial building – but he doesn’t appear to have read all of them.

This is a candidate embroiled in a controversy over engaging in romantic relations with a 14-year-old female when he was a 32-year-0ld assistant district attorney.

The credibility of the specific allegations, despite Moore’s less than air-clearing denials, appear to hold up.

In an interview last week with Fox News host Sean Hannity, Moore said the claims "are completely false and misleading." He said it was out of his “customary behavior” to date women younger than 18, adding: "I don't remember dating any girl without the permission of her mother".

Moore’s desperate defenders have sought flimsy biblical citations, including the ludicrous defense offered by Alabama’s State Auditor Jim Zeigler: “Joseph and Mary. Mary was a teenager and Joseph was an adult carpenter. They became the parents of Jesus. … There’s just nothing immoral or illegal here. Maybe just a little bit unusual.” Yes, Zeigler really said that.

There are reasonable voices. Sen. Mitch McConnell, the U.S. Senate’s majority leader, Monday called for Moore to drop out, adding that he believes the allegations. A host of other Republicans – including North Carolina’s Richard Burr and Thom Tillis, have made the same plea.

This is an election adrift at a time when there are critical issues before the nation: Will those in most need have access to health care? Do the wealthiest get a big tax cut and the rest of American workers get stuck paying an even bigger share of the costs of government? Can the United States continue to lead in global trade and the maintenance of peace?

Whether in Alabama or elsewhere in the nation, commentators have sought to portray voters as sharply divided. The reality is quite different. In Alabama, 85 percent of the voters are quite united – in their disengagement from the electoral process.

When a majority of voters neglect and abdicate their duty to a miniscule minority, Roy Moore and his ilk are the result.

So, even by Alabama standards, voters stayed away from the polls this year.

Failure of most voters to participate results in the election of politicians from the political fringe. The local commissions and state legislatures can become filled with politicians who pursue narrow, undemocratic agendas – from radical gerrymandering and legalization of discrimination to underfunding public education, neglecting the environment and corrupting of the judicial system.

Whether it’s the laser focus of the up-to-the-minute broadcast news cycle or the top trending topics on social media, Roy Moore and the ideological agenda he represents is dominating the debate. Next month Alabama voters will once again have their say.

How can anyone think voting isn’t important? Is there any doubt that a vote doesn’t make a difference?