Editorial: Protesters can't have their message hijacked by vigilantes or looters 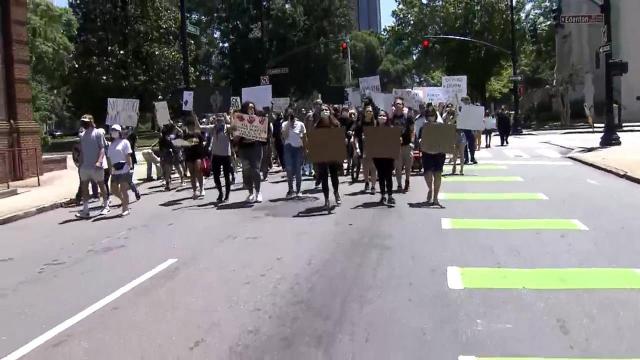 There are many who feel the way former UNC basketball star and NBA commentator Kenny Smith did Wednesday evening when he walked off the set of his Inside the NBA broadcast in support of players who were protesting the Jacob Blake shooting. They just need to say enough is enough.

The NBA postponed all of the games after the Milwaukee Bucks refused to take the floor in their playoff contest against the Orlando Magic – expressing solidarity with protesters who were speaking out against systemic racism and the killing of Blake in Kenosha, Wisconsin along with victims of a white 17-year-old vigilante who allegedly shot two protesters and wounded another.

Smith’s action should be a model for those – including those planning to take to the streets in Raleigh tonight – who want to express their concern and objections.

In a calm, but firm voice, Smith said: “This is tough. I mean right now my head is ready to explode." He continued. “I don't even know if I am even appropriate enough to say it, what the players are feeling and how they are feeling. … The biggest thing now as a Black man, as a former player, I think it's best for me to support the players and just not be here tonight."

He politely, but firmly, excused himself and walked off the set. There was no mistaking what he meant, what he stood for or why he did what he did.

The nation and the state face real challenges addressing the systemic racism that since 1619, has permeated nearly every aspect of public life for Black Americans. This is real. It shows in every aspect of life – schools students attend; college admissions; administration of justice; employment opportunities; access to financing; housing and health care; and in the way law enforcement engages with minority communities.

Amid the protests that have erupted, many communities have reacted constructively and launched serious efforts to address racism in their public institutions and public services.

The protesters' concerns need to be voiced. We all need to listen.

But just as importantly, there shouldn’t be diversions or abuses.

Downtown Raleigh businesses have already started boarding up their storefronts, anticipating the worst. The destruction to property and looting that erupted amid some protests IS NOT acceptable or justified. Those who engage in it should be arrested and prosecuted.

Raging, destroying property and looting overshadows and demeans the critical issues and concerns protesters are seeking to voice and demanding to have addressed.

Be assured, there are plenty of other forces at work seeking to dilute and distract.

Of most significant concern are vigilantes – too often too heavily armed as some kind of fashion statement – as a counter to the protesters. Their presence not only heightens tensions in an already emotional atmosphere but for some, is just the temptation to act in inappropriate, illegal or violent ways.

Their presence adds to the burden of law enforcement, as police seek to make sure protesters can safely exercise their First Amendment rights.

Raleigh Mayor Mary-Ann Bladwin has acted appropriately to declare a curfew for tonight and Saturday. It wasn’t, she said, an easy decision. But one that will protect protesters and the general public.  “Together, we can call for justice and hear the voices of our community and maintain a safe environment for everyone involved.,” she said.

Professional basketball and baseball games are on pause. It gives an opportunity to think about how we treat each other and how we might best move ahead to address the discrimination and unfairness that so pervades our society – so common  that too many don’t even acknowledge it.

Have your say. Say it emphatically. Don’t allow others to distract from the message or subvert it by temptations or taunts to violence and destruction.