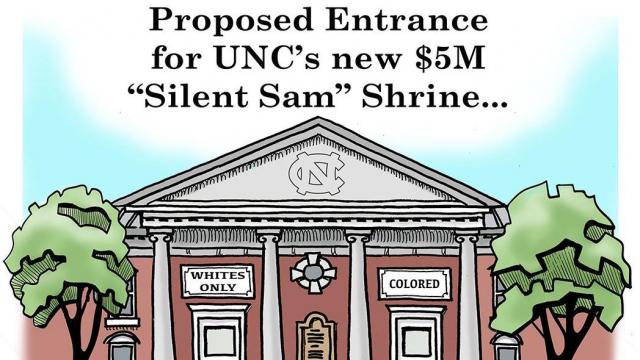 The University of North Carolina at Chapel Hill has a bad problem with what to do with the remains of “Silent Sam,” the recently dethroned Confederate statue. The campus Board of Trustees’ proposed solution – a $5.3 million “history center” – makes matters worse.

UNC officials say a 2015 state law limits their options and even forbids moving the statue off campus. It was a solution imposed in 2015, less to peacefully resolve the conflicts over the Jim Crow-era monuments around the state, than to cynically inflame partisan passions and ignite a political base.

Other than the politically-motivated sanctification of these statues, there is no reason they cannot be moved. Their continued presence, as seen by events on the UNC campus, in fact fosters threats to public safety.

“The university faces a high risk of violence, civil disorder, and property damage if the monument is restored to its original position,” was the conclusion of a security study by Chris Swecker, former assistant director of the FBI.

UNC officials have been clear about what they’d like to do with Silent Sam: “Our preference is to relocate the artifacts to a secure off-campus location.”

Rather than continuing to degrade and insult North Carolina citizens with the inappropriately prominent displays of racial discrimination and subjugation, it is time to develop a plan to appropriately relocate these relics.

It should NOT be a $5.3 million shrine, but a place where they can be displayed in proper context.

Fortunately, North Carolina has a perfect spot – the Bentonville Battlefield in Johnston County. It is the site of the last major Confederate offensive – less than three weeks before Confederate Gen. Robert E. Lee surrendered in Appomattox.

It is a state-owned 130-acre site, already includes a visitors center, exhibits and information that puts the site and March 19-21, 1865 events in context.

Costs to provide an appropriate and adequate exhibit site would be minimal, particularly compared to the exorbitant $5.3 million cost estimated for the UNC site – not to mention the $800,000-a-year operation expense. There would be little need for additional staff and there’s already security at the Bentonville site.

Some – far too many apparently in the General Assembly – look fondly on these statues. But they are testament to a dark time in North Carolina and the South. Those times have left deep wounds. The state and too many of its people still struggle to overcome the toll discrimination has taken.

The General Assembly can start to fix some of the damage it created by repealing Session Law 2015-170 so UNC, other campuses and local agencies, can determine for themselves how best to dispose of these relics of oppression. It should also free the state to provide an appropriate space at Bentonville to for the statues.