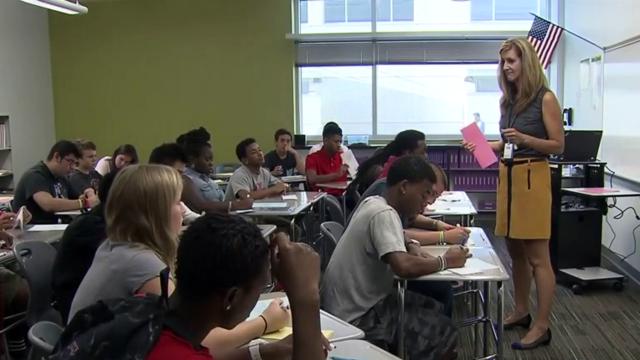 There is a clear message coming out of General Assembly on its priorities for education.

What is most important to Senate leader Phil Berger, House Speaker Tim Moore and the majority in the legislature? Politics and partisan loyalty.

It is not public education.

That was made clear when they offered to increase the teacher pay raise if Democrats would vote to override the governor's veto of the main state budget bill.

That is the big reveal. Playing games with teachers' salaries.

That is the undeniable truth. Berger and Moore obviously believe that they can pay teachers more than they budgeted. The question is why didn’t they do that in their original budget?

None of this is based on what is needed to assure a quality education for North Carolina’s children. All of it is about politics. It is about how much legislators must spend in their effort to avoid negotiating with Gov. Roy Cooper.

Here’s the truth and it is why the Moore-Berger gimmick gets no traction.

It is the responsibility of the state to pay the on-going costs of public instruction – getting kids to and from school and providing the resources they need while in school to get a good education. The legislature’s failure to meet this mandate has it under a court order, known as the “Leandro Decision” to do better. Shortly the court will be delivering specifics on what needs to be done amid the legislature’s failure to comply.

Teachers and parents can add and subtract.

They know that North Carolina spends less per student for public education than all but five states.

The know that the stats for “average” annual teacher pay are inflated because of the large local supplements paid by a handful of school districts. The reality is that average teacher pay in North Carolina, as appropriated by the General Assembly, is $48,420 and not the local funds-inflated $53,975. They know a teacher with 37 or more years’ experience earns just $57,510.

North Carolinians know when they read “additional compensation increases and education-related provisions contingent upon the passage of House Bill 966,” there’s a dangerous catch. It is a bribe.

It is simply about one thing – giving the majority in the General Assembly a meaningless victory over the governor.

And teachers know it. They don’t buy Berger's statement that it is Cooper who wants to “use teachers as political pawns."

And North Carolinians know that Senate Bill 354 is nothing more than a transparent ploy to avoid their responsibility to take an override vote, and if it fails, then negotiate with the governor.

The governor needs to veto this bill and common-sense legislators need to sustain that veto to force passage of legislation that will truly fund the needs of North Carolina’s public schools to fulfill the guarantee of access to a quality education for every child.