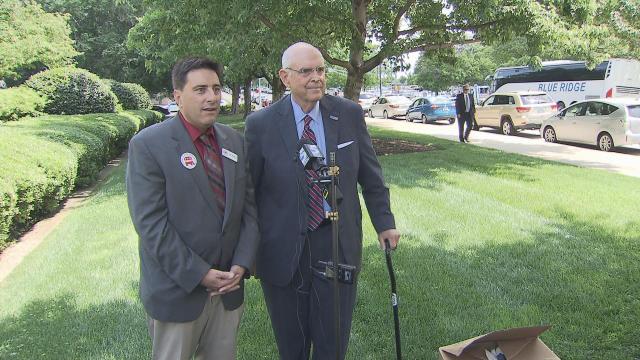 The performances of North Carolina Republican Party Chairman Robin Hayes and the party’s Executive Director Dallas Woodhouse -- amid efforts by Gov. Roy Cooper to keep state regulation of elections up and running – might easily be confused with behavior on a bad day at a pre-school child care center.

Their confrontational comments and inappropriate comportment came as a recent court order put the status of the State Board of Elections in limbo as it works to fairly and diligently handle the disputed election in the Ninth Congressional District. Hayes and Woodhouse don’t want an adult resolution. They want a schoolyard bully’s victory.

The new majority in the U.S. House of Representatives has already signaled the continued uncertainty around the results in the Ninth District means no one will be seated when Congress convenes today.

Rather than continuing their impulsive desire to gain a partisan advantage, state Republican officials should make it their first priority to be sure EVERY election – including the current unresolved one in the Ninth District – is fair, free of fraud and absentee ballot manipulation. This should not be an alien concept for the state’s Republicans given their demands for photo ID at the polling place.

Their behavior has been erratic. In less than a month, they and other GOP leaders have: Demanded the Republican candidate Mark Harris be declared the winner; Supported a delay in certification of a winner pending a full investigation; Said the alleged improper activity tainted the Republican primary so there needed to be a full do-over and; Now, again, demanding Harris be certified the election winner.

In a silly statement Hayes said if he didn’t get his way he wouldn’t play, refusing to allow ANY Republican to take part in the interim Elections Board Democrat Cooper was forming. He took to playground name-calling.

While most rational folks would say the latest evidence suggests drawing any conclusion about the Ninth District election now is premature, Woodhouse threw a tantrum on CNN declaring that the state Board of Elections was looking to “take away an election victory earned by Mr. (Mark) Harris and the Republican Party at the ballot box.”

The fault, dear Dallas Woodhouse, lies not with the state board. Republicans have managed to make their own mess of things – even against odds they’d rigged heavily in their favor through unconstitutional gerrymandering. It is astonishing given the pre-election manipulations, that Democrats launched a competitive challenge.

On the one hand, GOP leaders contend – as Woodhouse suggested in the CNN interview -- that they won the election fair-and-square. On the other hand, they contend the GOP primary, like the general election, was tainted by illegal activity concerning absentee ballots, so there needs to be a new primary AND election in the district.

It is silly and childish. North Carolina voters are tired of the unconstitutional gerrymandering, unconstitutional laws that breed court battles and foster – as we are seeing now – confusion and instability and power-grabbing amendments to the State Constitution (just look at the overwhelming majorities that rejected those power-grabbing amendments pushed by the GOP legislative leadership).

It is past time for Republicans to stop.

The questionable issues and concerns over handling of absentee ballots that arose in Bladen County – with enough votes in question to sway the outcome of the congressional election – have been hanging around since the 2016 election. So serious, in fact, that the state elections board voted UNAMIOUSLY (that includes the Republicans who were put on the board by Hayes and Woodhouse) to get the U.S. Attorney to investigate. “The evidence we have obtained suggest that these efforts may have taken place in the past and if not addressed will likely continue for future elections.”

Woodhouse wrongly terms the state board’s efforts a “never-ending fishing expedition, which has turned into more of a partisan attempt to overturn an election than to actually find the truth."

Republican leaders are emerging as a distractive sideshow to the very serious business of elections and governing. It isn’t entertaining.

It is past time for the state’s Republicans to shut down their not-ready-for-prime-time reality show. Stop the stonewalling. Stop the bullying. Join in building a North Carolina that welcomes a variety of voices and serves EVERYONE regardless of ideology or political affiliation.