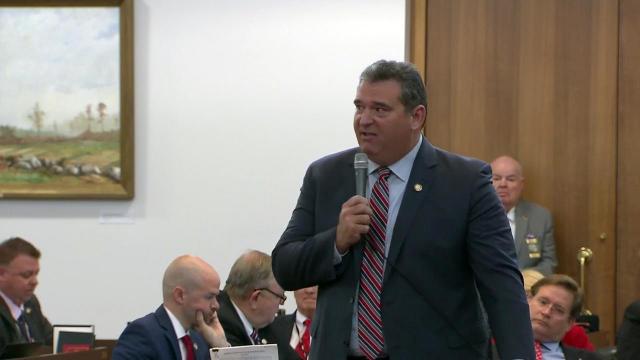 When it comes to gerrymandering, state Rep. David Lewis has even figured out how to do it for a legislative committee meeting. Lewis, a Harnett County Republicans, after all is one of the architects of North Carolina’s illegally gerrymandered legislative and congressional districts.

During a legislative meeting Monday about implementing the newly enacted constitutional amendment requiring voters show a photo ID at polling places, all but a few of the public comment speakers self-identified as Republicans and echoed legislative leaders’ talking points.

Coincidence? Perhaps. Just as it was that it was state GOP chairman Dallas Woodhouse who announced in an e-mail late last Wednesday afternoon, as most folks were focused on Thanksgiving plans, that the legislature would hold a “public hearing” on the voter ID amendment on Monday at 10 a.m.

There were some non-scripted voices heard from – and not just those who continue to have serious questions about the true motives behind the push for voter ID.

This is the second go-round on this issue after the last attempt was criticized by federal courts as being focused on discouraging minority voting with “surgical precision.”

Be that as it may, voter ID is a part of the State Constitution. The legislature should take MORE TIME and MORE CARE in how it implements the requirement. Lewis was vague when other legislators unsuccessfully sought more detail on the timeline for development and passage of a bill.

While Monday’s session was largely perfunctory, Lewis did state that his mandate from Senate leader Phil Berger and House Speaker Tim Moore was “not to be rushed in anyway.”

If true, that’s good advice and he should take it to heart.

For example, Lewis did disclose that much of the draft bill before the committee came directly from South Carolina’s voter ID law. Federal courts did not block that law because it interpreted it to say that voters without ID only needed to certify that they have a “reasonable impediment for not having a photo ID” -- lacking a birth certificate, transportation or any other reasonable obstacle.

Why the South Carolina law? Lewis didn’t say. Dallas Woodhouse has said the Georgia or Indiana voter ID laws should be state models.

Others, who are somewhat less enthusiastic about voter ID, point to the West Virginia law as a model. It lists 18 acceptable forms of photo identification – from state issued cards to bank cards and concealed-to-carry weapon permits.

Additionally, what would be done in elections that closely follow natural disasters (think Hurricane Florence or the awful forest fires in California) when people are uprooted?

GERRY COHEN: How to implement a fair voter ID law

There is an April 15, 2019 deadline for the adoption of rules to implement the law. Why so soon? Wouldn’t it be wiser to have it implemented for the start of the 2020 election cycle – giving more time for implementation so policies, equipment and people are properly in place?

We hope that if there’s one thing Lewis and other legislative leaders realize from Monday’s session it is that it will take more than 150 minutes to learn all that is needed to pass an ID law that will encourage, not discourage, voting and be upheld by the courts.

Lame-duck session could stretch on in Raleigh

Our laws should encourage all eligible citizens to vote and not needlessly construct impediments that make it more difficult.