Editorial: Obama and Bush show what being presidential is about 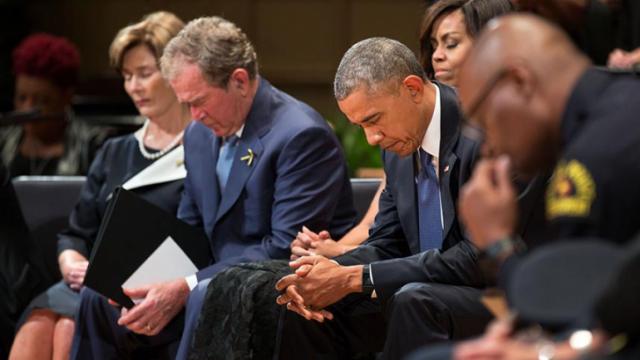 A CBC editorial: Monday, July 18, 2016; Editorial# 8030
The following is the opinion of Capitol Broadcasting Company

Global and national news -- violence of numbing magnitude like the tragedy in Nice, France, or frivolous distractions like Pokemon Go – can make it easy to forget, or miss, moments of true statesmanship and leadership.

There was such an occurrence last Tuesday when President Barack Obama and former President George W. Bush appeared together in Dallas at the memorial service for the five police officers killed in the line of duty following a Black Lives Matter protest rally.

Anyone looking to see presidential character on display, need look no further than this service. Watch, listen and read the words of Obama, a Democrat, and Bush, a Republican. They were compassionate, uniting, uplifting and inspiring.

“As Americans, we can decide that people like this killer (in Dallas) will ultimately fail. They will not drive us apart. We can decide to come together and make our country reflect the good inside us, the hopes and simple dreams we share,” Obama said.

“Too often, we judge other groups by their worst examples, while judging ourselves by our best intentions. And this has strained our bonds of understanding and common purpose. But Americans, I think, have a great advantage. To renew our unity, we only need to remember our values,” Bush said.

The two, at this solemn occasion, offered American voters a good yardstick by which to measure presidential character as the 2016 campaign season gets into full swing.

You can watch President Obama’s speech here and read the text here.

You can watch President Bush’s speech here and and read the text here.

Remember, commit to register and vote in November.