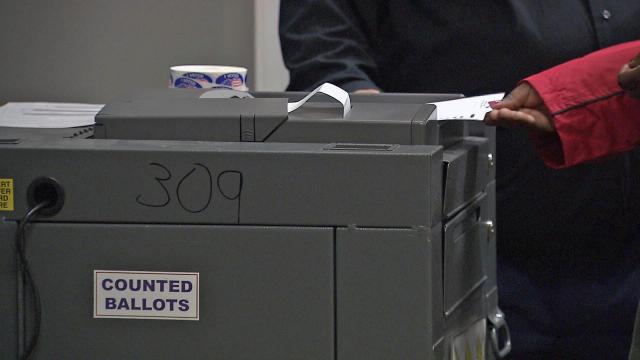 A CBC Editorial: Friday, Sept. 16. 2016; Editorial# 8056
The following is the opinion of Capitol Broadcasting Company

Gov. Pat McCrory and the General Assembly have made it perfectly clear that there are no limits to what they will do to improve their partisan advantage. They certainly will not let a little thing like our state and federal Constitutions stop them.

First, they gerrymandered congressional and legislative districts in an extreme manner. Then they passed election law changes, under a misleading voter identification label, that were really designed to stifle minority and youth turnout.

And finally, there was a remarkable attempt to protect a state Supreme Court seat by switching to a "retention election" for the current Republican seat holder.

These three efforts are akin in that they’ve been, at least partially, overturned by either the state or federal courts. And there’s more litigation to come.

The obvious efforts to discriminate against black voters are shrugged off by the Republican legislators who concocted the scheme. But the federal appeals court’s dissection of the legislation revealed purposeful racial discrimination.

The Republican leadership replied – we’re not racists, this is just politics.

There is one other partisan maneuver that’s not headed to the courts but should be noted by all voters.

In a stealthy last-minute legislative maneuver, lawmakers changed the rules for the “nonpartisan” election of judges to the state Court of Appeals.

With Senate President Pro Tempore Phil Berger’s son and namesake on the Court of Appeals ballot, legislators mandated a change in the State Board of Elections alphabetical protocol to dictate the order that candidates are listed on the ballot so Republicans would be listed first. Curiously the change only effects the Court of Appeals.

In the case of Berger Jr., his name suddenly moved from the bottom to the top in the race against incumbent Linda Stephens. And, in every other state Court of Appeals contest, the General Assembly’s “tweak” to the rules means Republicans move above the Democrats.

Darren Grant at Sam Houston State University had studied ballot order and has documented the advantages of being listed first on the ballot. Grant found that in races where candidates aren’t well known – like North Carolina’s judicial races – being first on the ballot could give a candidate an advantage of 10-percentage points or more.

The legislation originated in the Senate but was gutted and re-written in the House of Representatives where the ballot shift provision was added. While no one stepped forward with pride of authorship, Rep. Bert Jones, a Republican who like Berger represents Rockingham County, shepherded the revised bill though the House.

Sen. Berger voted for the revised bill when it came up in the Senate. Should Berger have abstained from voting on it? Did Berger make sure his fellow senators were aware of what they were approving before they voted? Would this bill have even come forward if Phil Berger Jr. was not on the ballot? Will this bill guarantee the election of Phil Berger Jr.?

Ask Rep Phil Jones what he had in mind when he pushed the legislation.

We have choices in November.

NOTE: Democrat Vince Rozier, whose name would have been on top of his state Court of Appeals contest based on the original Board of Elections rules, is now listed below Republican Richard Dietz. That is in contrast with the order of candidates for the state Supreme Court, since the board’s original listing protocol remained in force and there are no party designations. Incumbent Justice Bob Edmunds, a Republican, is listed on the ballot BELOW Michael Morgan.