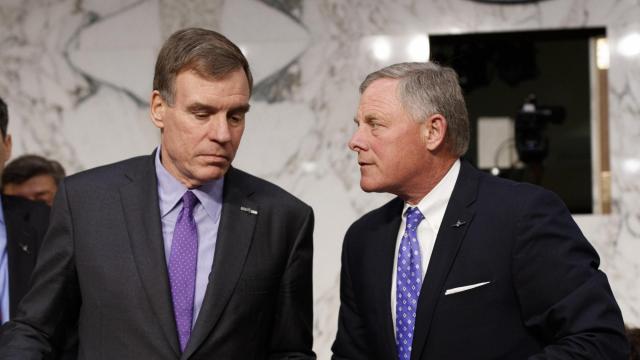 It must be more than a personal fashion statement – he rarely wears socks.

It must take the big things to a higher level. Even more than Burr’s showing he can override partisanship. In 2014 he refused to contribute to the Republican running against his friend on the Senate Intelligence Committee, Democrat Mark Warner in the Virginia U.S. Senate race. Warner returned the favor in Burr’s 2016 campaign. The two have maintained a strong and collegial relationship as their party’s leaders on the Senate Intelligence Committee.

After the headline-grabbing televised House Intelligence Committee grilled Joseph Maguire, the acting director of National Intelligence, Burr’s Senate committee heard from Maguire behind closed doors about allegations in a whistleblower complaint that President Donald Trump used the power of his office to solicit a foreign nation’s interference in the 2020 elections.

Burr’s comments as committee chairman were typically understated, as were the words from ranking Democrat Warner. “We are started in the process — don't expect us to move at light speed — that'll probably happen in the House,” Burr said. It is important, Warner added, to maintain the “integrity of the whistleblower process. People need to be able to come forward when they've seen incidents of waste, fraud, abuse, or inappropriate behavior and feel like there are not going to be reprisals.”

While Burr may not want to rush, it is important that he is diligent and not dawdle. He needs to demonstrate that he won’t be cowed by the goon-like threats coming from Trump loyalists.

It was Burr himself who promised North Carolina’s voters, when he said he’d not seek re-election again, that he’d be an uncompromising presence -- withstanding and rising above partisanship when time and circumstance demanded it.

North Carolinians cannot rely on Sen. Thom Tillis – who quakes at every Trump tweet and parrots whatever spin the White House sends out.

This is a time when it appears the president is shaking down the leader of the Ukraine for campaign dirt on a potential opponent. He seeks to order border patrol agents to shoot migrants in the legs to slow them. This is not typical, normal or reasonable.

The time is now for Burr to stand up. He needs to assure his constituents that his priority is the integrity of the presidency and the independence of the Senate and legislative branch of government.

Burr can take his place among senators from neighboring states, but different sides of the partisan isle, who put the nation above politics. Forty-six years ago North Carolina’s Sam Ervin and Tennessee’s Howard Baker helped lift our nation out from its “long national nightmare.”

Burr made a pledge to North Carolina voters in 2016. Burr now needs to let his constituents know, in no uncertain terms, that the time has come and he will deliver.