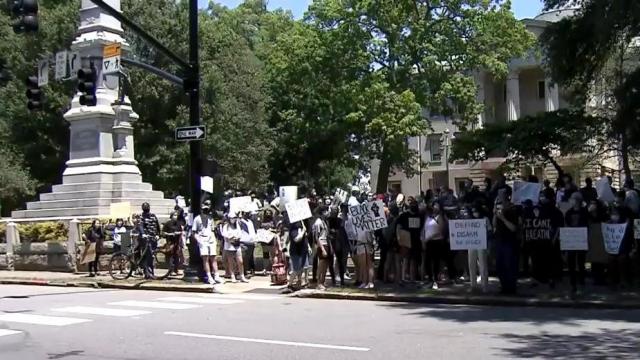 What does the chant “Defund the Police!” mean? It is a slogan rising out of efforts to change the relationships between citizens and law enforcement. It is about finding ways to make police integral parts of communities and the lives of people who live in them. It does not mean eliminate law enforcement.

Would anyone imagine that cry would arise from the leadership of North Carolina’s General Assembly?

But that slogan from the streets certainly does apply to the latest legislative maneuvers aimed at attacking, weakening and belittling Gov. Roy Cooper.

Daniel was not so much referencing the Capitol building, which remained unblemished through last weekend’s protest, but to the monuments glorifying the Confederacy that some protesters damaged. (Let’s be clear, as we’ve stressed before. There is no justification for the vandalism or actions which placed the safety of people – protesters and law officers alike – in jeopardy.)

The Capitol’s Confederate monuments, as a matter of public safety, are being dismantled and placed in safe storage – for their protection too --- while an appropriate place and time is found for their future. That is in accord with the law the General Assembly passed in 2015.

Daniel wasn’t alone in the call to “defund the police.” Sen. Danny Britt on Monday during an online panel discussion, asked if the Capitol Police needed “more funding so that they can have a team that could respond more effectively so that law enforcement officers could be safe? Or do they not need as much funding because they are not going to protect the state property?”

Now, these legislators would of course say there are very specific qualifications to their desire to “defund the police.” But where have we heard those kinds of qualifications before from the other side of the argument – often unheeded by the likes of Daniel and Britt?

They say, mostly out of desire to take some partisan pot-shots at the governor, that the police failed to do their job – being more concerned with the health and safety of human beings. “Confederate Statues Matter!” is the essence of their cry.

Both Britt and Daniel – along with other legislative leaders – have falsely insinuated that actions and activities of the Capitol Police during the protests were personally and directly supervised by the governor.

Rather than finger-pointing for blame and desperately grasping for an elusive partisan advantage, the General Assembly would be better off acknowledging that “Black Lives Matter.”

Instead of “defund the police,” the legislature should spend its time fixing systemic discrimination – the imposition of which is symbolized by the statues that are the focal point of protesters’ wrath. Address and fund the policies and programs that open ALL services and opportunities to every North Carolinian, regardless of race, color, national origin, sex and religion.

No slogans. No partisan positioning.