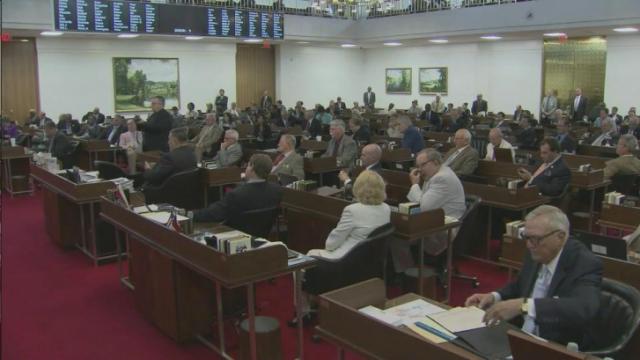 -- Rep. Chuck McGrady provided his western North Carolina constituents with rare insight into the tough negotiations during the closing days of the legislative session.
-- Too much of the critical legislation crafting and policy decision-making goes on outside the public view.
-- What is gained by hiding important law-making decisions from the view of taxpayers?

A CBC editorial: Monday, July 11, 2016; Editorial# 8028
​The following is the opinion of Capitol Broadcasting Company

The final days of any session of the N.C. General Assembly are hectic, confusing and tension-filled. Loose ends need to be tied up, important and contentious issues need to be resolved and unanticipated concerns suddenly must be addressed. All this goes on amid late-night, caffeine-fueled meetings where sleep-deprived legislators, staffers and others must be alert and detail oriented.

Also, much of this goes on outside the public view. That is what made an end-of-session web post by state Rep. Chuck McGrady, a Henderson County Republican, so interesting and insightful. McGrady is a key player in the House of Representatives, with close ties to the leadership plus status and access to the inner-workings of the law-making process.

On his website, McGrady discussed the most contentious issues of the session: regulatory reform, dealing with coal ash, figuring out what to do about HB2. He offered specific details of where the House and Senate negotiators disagreed. He pointed out why some compromises were reached and what differences kept others from being resolved.  He did it without taking any gratuitous pot-shots at legislators – particularly state senators – who disagreed with him.  “My effectiveness as a legislator is largely related to my relationship with my peers,” he said.

McGrady writes his regular newsletters himself. “There’s a lot of what goes on at the General Assembly that isn’t very transparent and is hard to understand,” McGrady said during an interview this week. “I try to explain that.”

In the report that McGrady posted just a few hours after the 2016 session closed, he observed that when the regulatory reform conference committee broke up at 1:30 a.m. before the last day of the session, he believed a compromise was at hand.

“I went to bed on the last morning expecting that those issues would be resolved and we’d pass another broad regulatory reform bill,” McGrady wrote. But daylight didn’t bring a deal. “Support for specific language related to wind farms and the military were late developing. The electronic recycling provision was controversial in the House, and many legislators, both Republicans and Democrats, just didn’t want to take up that issue feeling that it was a Long Session issue.”

The public wasn’t privy to any of these negotiations and McGrady admits that the closed process sometimes results in key legislation not being as thorough as necessary, including mistakes that have unintended consequences. “Too often committees don’t do the proper vetting. A more public process might help us avoid those mistakes,” he said.

On the other hand, McGrady said the current process allows legislators to be more frank and candid. He says there’s the opportunity to ask legislators, “point blank” what concern they’re trying to resolve.

McGrady says he’s able to resolve, to an extent, those conflicting concerns through his web newsletter. It pulls the curtain back, a bit, on the crucial inner-workings of the legislative process.

To be sure McGrady isn’t advocating any major changes in how the General Assembly operates. But his newsletters’ revealing look at the inner working of legislative negotiations is a reminder of what taxpayers are missing.

A more transparent process – where key negotiating discussions are open and differences are publically aired -- would give the public a clearer picture of how responsive their elected officials are to their concerns and the needs of the state. On critical and complicated policy issues, legislators might even benefit from additional public input.

In an era of diminishing public trust in government and government officials, shedding more light on the way critical differences are resolved in the legislature and conducting those discussions more openly, might restore some faith.

While not McGrady’s intent, his candid correspondence to his constituents, may be showing a way.