Editorial: More participate in N.C. democracy thanks to Bob Hall 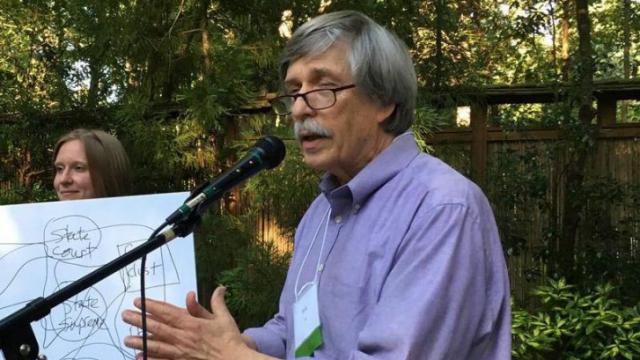 A CBC Editorial: Monday, Dec. 26, 2016; Editorial# 8102
The following is the opinion of Capitol Broadcasting Company

Bob Hall’s mission at Democracy North Carolina the last 25 years can be boiled down to a dozen words: Keep elections and government clean. Get everyone who can vote, to vote.

During this last election, at least 2.9 million North Carolina voters – 61 percent of all people who cast ballots in November – voted early. They all should thank Bob Hall. As much as anybody, Hall’s Democracy North Carolina is the reason our state has – and kept in 2016 – early voting.

It would make a long, but deserved, reception line as Hall, 72, prepares to retire this spring from leading the organization he created.

Hall’s efforts have strengthened our state’s government and politics by getting as many people involved as possible. Through it all, Hall has the proud distinction of having been praised and vilified, sometime in the same breath, by Democrats and Republicans alike.

In-depth looks at the relationship between money and politics by Hall’s Democracy N.C. have revealed questionable activities by officeholders and prompted investigations and even legal prosecutions. In 1992, Hall’s organization examined how Republican Gov. Jim Martin’s appointees to the state Board of Transportation misused state transportation funds for their businesses.

Five years later, Hall’s group produced reports showing how Board of Transportation members appointed by Democratic Gov. Jim Hunt abused their positions – leading to board members’ resignations, examinations by the State Auditor and FBI and a series of reforms.

In 2009, it was Democracy N.C. that complained to the State Board of Elections about campaign finance irregularities concerning the state Democratic Party and Gov. Mike Easley’s campaign.

It was Democracy N.C. that raised questions concerning allegations of illegal donations from a sweepstakes gambling vendor to state House and Senate Republicans, and involvement of Gov. Pat McCrory. When McCrory replaced all five State Board of Elections members, one of his appointees was a lobbyist for the sweepstakes magnate – who later was forced to resign after the relationship was uncovered.

Hall was a key force in moving North Carolina to its successful adoption of nonpartisan judicial elections and, until discontinued by the current GOP majority in the legislature, it was a much-praised and copied system for public financing of those elections.

He’s received well-earned recognition for his work, including a MacArthur Fellow Award (known as the “genius grant”) and the N.C. Press Association’s First Amendment Award.

Hall’s determination and integrity has been critical to thwarting efforts to retreat on voting rights while exposing those who abuse the election process for personal gain or petty partisan advantage. He has also been outspoken against hyperpartisan gerrymandering of congressional and legislative districts, supporting independent nonpartisan redistricting.

It is not glamorous work. It often creates bitter enemies. But Hall’s integrity and hard work gained even stronger allies. He has helped build a more inclusive North Carolina where more people than ever are able to participate in their government.

We salute Hall’s remarkable legacy – and more importantly -- the example he offers to those who follow in his effort to make our elections fair, give everyone full and easy access to the polls and create a state that is more open and inclusive.