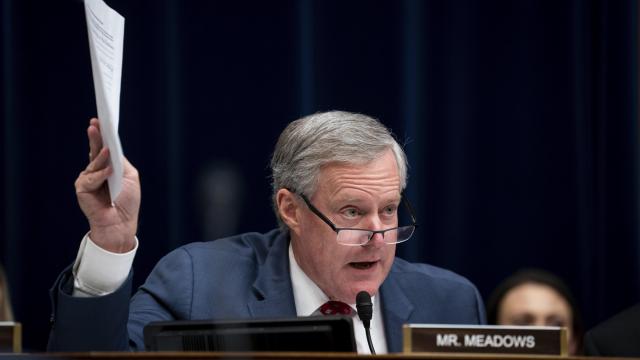 When it comes to confessed liar Michael Cohen, North Carolina Congressman Mark Meadows is big on the truth.

“Giving Cohen a congressional platform is a disservice to the public, an affront to our democratic values and flat-out offensive to anyone who seeks the truth,” Meadows said in a USA TODAY op-ed he co-authored with Rep. Jim Jordan, R-Ohio a day before Cohen’s much-watched testimony before the U.S. House Oversight and Reform Committee.

During the hearing a much-animated Meadows complained of Cohen’s “insatiable desire for celebrity” and in a heated exchange said: “I’m concerned about your lies today.”

While dogged during the hearing in demanding the truth from Cohen, he’s been more of a lap dog when it comes to setting the same standard of President Donald Trump.

Meadows hasn’t uttered a word of concern – much less an ounce of outrage, about a president who has offered 9,179 false or misleading claims through March 17 – his 787th day in office, according to The Washington Post FactChecker.

He’s not made a peep of protest for the 675 Trump claims reviewed by PolitiFact, where 84 percent have been rated half-true or worse – 49 percent false or “Pants on Fire.”

During the hearings Rep. Jamie Raskin, a Democrat from Maryland, might have come close to explaining Meadows’ frustration and double standard. "Our colleagues aren't upset because you lied to Congress for the president,” he said seeming to address Cohen but really Meadows and others on the committee and those watching. “They're upset because you've stopped lying to Congress for the president."

Even the president’s numbers and facts guy, Budget Director Mick Mulvaney fudges for the president -- most recently on Fox News Sunday.

"Let's take what happened in New Zealand yesterday for what it is, a terrible, evil, tragic act, and figure out why those things are becoming more prevalent in the world," he continued. "Is it Donald Trump? Absolutely not.”

Well, not quite. Brenton Harrison Tarrant, the Australian white supremacist accused of murdering 50 Moslems while they worshipped, posed this rhetorical question in his online manifesto before the attack: “Were/are you a supporter of Donald Trump?” His answer: “As a symbol of renewed white identity and common purpose? Sure.”

Terrant’s connection is no meander – it is direct. While Mulvaney can challenge whether that makes Trump responsible, it is an undeniable connection.

Is Trump’s lying simply the price to pay for judges and courts that could outlaw abortion? Is it what it takes to enact more tax cuts and slash business and environmental regulations?

If so, Meadows shares a disturbing lack of integrity that diminishes his service and cannot be tolerated by North Carolina voters – no matter the political party or ideological outlook.