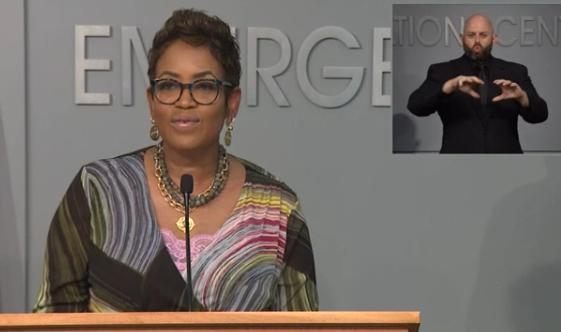 Anyone looking for the ingredients to make North Carolina’s top economic development and jobs official need look no further than Machelle Sanders.

She has a resume custom-designed for anyone who might be Gov. Roy Cooper’s next secretary of the North Carolina Department of Commerce. The General Assembly should speedily confirm Cooper’s appointment.

She’s been a top executive in the hottest, fastest sector of the state and national economy – biotechnology. She was vice president of manufacturing and general manager at Biogen's Research Triangle Park campus.

Her success, experience and skill make her much sought out by biotech firms worldwide for advice and service on corporate boards.

She knows North Carolina government. For the last four years she’s headed the state Department of Administration – the agency that’s key mission is to keep the wheels of government spinning.

Sanders also takes on challenges. She’s led the Andrea Harris Social, Economic, Environmental and Health Equity Task Force that works to “address the social, environmental, economic, and health disparities in communities of color disproportionately impacted by COVID-19.” Additionally, that work has given her keen insight into the needs of the state’s unemployed workers as it is her agency that oversees the state’s unemployment benefits agency.

She knows the state. Sanders grew up in rural eastern North Carolina and as an adult has lived in the state’s larger metropolitan counties.

She is a product – literally from birth -- of North Carolina’s public education system. She’s a graduate of Bath High School in Beaufort County and gained an undergraduate degree in biochemistry from N.C. State University.

Both her parents were public school teachers -- her mother Bertha Baker taught second grade at Bath Elementary School and her late father Albert Baker was a teacher and champion basketball coach at Beaufort County schools, including Pantego High School. She’s worked to promote STEM education and careers to young women.

She’s gained near universal praise – even from some of Gov. Roy Cooper’s most reflexive critics.

The State Chamber of Commerce, which doesn't come easy to praising many of Cooper's actions, was quick to support her Commerce nomination (SEE NOTE BELOW).  Four years ago the Chamber was unusually effusive about her nomination to lead the Department of Administration. It was a “smart selection,” the Feb. 2017 Chamber statement said. “A proven leader known for her motivating approach, Machelle’s eye for operations will be a valuable asset in making the Department of Administration function effectively and efficiently.”

Of her current appointment, key economic development leaders have been unreserved in their support, in a recent Triangle Business Journal profile.

Chris Chung, CEO of the Economic Development Partnership of North Carolina, said Sanders has “personally been very helpful to the EDPNC on multiple occasions when we’ve sought her assistance with our economic development efforts.” The partnership was created and largely funded by the state legislature.

Scott Levitan, president and CEO of the Research Triangle Foundation, said: “The governor has appointed an individual with deep knowledge of the opportunities available to North Carolina and RTP and the experience at the state and in business to deliver for all residents.”

Douglas Edgerton, president and CEO of the N.C. Biotechnology Center said Sanders “will be a superb Secretary of Commerce for North Carolina. She has a deep understanding of the all-important life sciences sector, of course, but she also has uncanny wisdom, overall business savvy and people skills.”

The General Assembly needs to move quickly to voice its strong backing of Sander’s appointment – sending a united signal to current, expanding and new businesses – that North Carolina is THE place to grow and prosper.

(NOTE: This editorial was updated to reflect the Feb. 12 Twitter message from the N.C. Chamber of Commerce to "applaud @NC_Governor's naming of Machelle Sanders to lead @NCCommerce.")