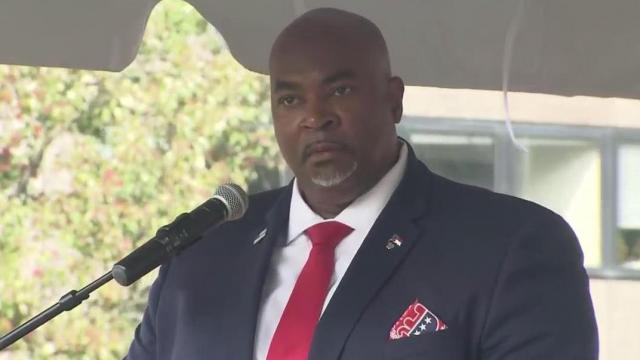 “Tell our enemies on the other side of the aisle that would drag this nation down into a socialist hellhole, that you will only do it as you run past me, laying on the ground, choking on my own blood. Because I will not give up this nation to you. It is not yours. You did not build it. You did not defend it and you will not own it.  We will. The Christian patriots of this nation will own this nation and rule this nation and help freedom survive for future generations. Stand strong, stand proud. Let's save this state, the nation. Let's be the people who preserve freedom for the future. God bless you all. God bless the great state of North Carolina and God bless the United States of America.”

It was arrogant, mean and un-American. It was the kind of divisive rhetoric that might come from dictators like Hungary’s Victor Orban – not someone who is the lieutenant governor of North Carolina. But tragically, uninformed, over-the-top, hurtful and inflammatory speech has become the norm for Lt. Gov. Mark Robinson.

Do other Republican leaders in this state – Senate leader Phil Berger, House Speaker Tim Moore and state GOP Chairman Michael Whatley, stand with Robinson’s detestable views? Is this what they are looking for in the party’s next nominee for governor?

“Enemies” across the aisle? Democrats are NOT the “enemies” of Republicans or anyone else in this nation. Nor are Republicans. They are, as the cliché goes, the “loyal opposition.”

“Socialist hellhole?” What is he talking about? Expressing concern for others, providing for their education and basic health needs regardless of where or how they live, who their parents might be or national origin, isn’t socialism. It is human decency.

Robinson’s “Christian patriots” who “will own this nation and rule this nation.” Has he read AND UNDERSTOOD the Declaration of Independence and the Constitution?” Does he understand what the nation’s founders meant?

“Governments are instituted among Men, deriving their just powers from the consent of the governed,” says the Declaration of Independence.

“We the People of the United States, in Order to form a more perfect Union, establish Justice, insure domestic Tranquility, provide for the common defence, promote the general Welfare, and secure the Blessings of Liberty to ourselves and our Posterity, do ordain and establish this Constitution for the United States of America,” says the Preamble to the Constitution.

Who anointed Mark Robinson – or anyone else – to be the arbiter of those who might be “Christian” to be sufficiently patriotic? There's no state religion in this nation.

What empowers him to say those he doesn’t consider “Christians” are not a part of the nation? Must those who don’t fit his definitions be driven out? Does he want to expel non-believers, Hindus, Muslims, Jews, agnostics and others?

“When a politician tells you disagreeing with him is the same as disagreeing with God, you may want to take that with a grain of salt. It’s more likely the reason he wants to kick people in the teeth is because they criticize him. … I’ve also read Christ’s warning in the Sermon on the Mount, ‘Beware of false prophets, which come to you in sheep’s clothing, but inwardly they are ravening wolves. Ye shall know them by their fruits.’”

Wells by the way, served a term in the state House of Representatives and three terms in the Senate. He is currently a member of the State Board of Transportation. He finished second to Robinson in the 2020 GOP primary for lieutenant governor.

Wells should not be a Republican voice in the wilderness when it comes to condemning the mean-spirited rhetoric of divisiveness.

North Carolinians, regardless of ideology and political affiliation, need to be better than that. And those who are our leaders should not hesitate, nor dread, to call out those who market in fear to sow prejudice and distrust.

Mark Robinson has crossed the line and those on his “side of the aisle” must let him – and the rest of us – know it.