When North Carolina’s legislative leaders lifted the veil of secrecy off their budget last week, Senate Leader Phil Berger and House Speaker Tim Moore were accompanied by a large poster that purported to contrast it with what Gov. Roy Cooper offered.

However, there were some errors of omission and commission on the chart that need to be cleared up. We’ve produced an up-dated version of the chart (below) – adding some of the missing information that was “not provided” in the legislative version.

The legislature’s “income tax relief” is not what it may seem – particularly for every-day North Carolinians. Ninety-three percent of $108.6 million legislative leaders list as “income tax relief” in the next fiscal year goes to businesses. The year after, 80 percent of the $278.2 million in tax cuts go to businesses. Sales and use tax changes will cost taxpayers an additional $94.6 million next year and $132.2 million the year after that. 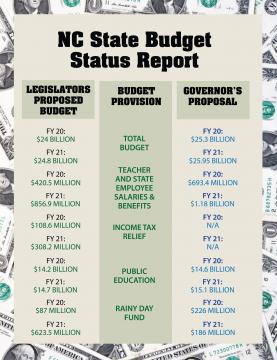