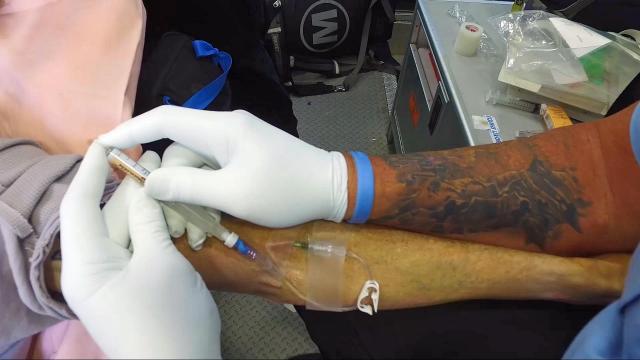 The response to this crisis in North Carolina needs to be more than half-funded measures and token efforts.

That is the clear message from “Searching for a Fix,” the WRAL-TV documentary broadcast Tuesday evening. It presented the depth of the problem in unvarnished and heart-breaking detail. The epidemic doesn’t play favorites, it strikes our neighbors, co-workers, friends and children.

While it may be difficult for some to watch, it is not to be missed. It is honest and offers a critical opportunity to talk openly and candidly about confronting the problem and taking steps to save lives and our communities.

The documentary’s portraits of addicts, their families, the emergency responders and law enforcement officers are vivid and revealing. They are the real people, struggles and tragedies behind the statistics.

As the documentary clearly shows, this is not a problem isolated to back alleys or only among the young. It is a problem that reaches into every corner of the state and doesn’t distinguish by economic stature. It’s a problem often starting with legitimate efforts to help patients manage pain. But with lack of oversight, it too often leads to addiction. As desperate addicts seek less expensive and easier to acquire drugs, it leads to heroin.

The General Assembly made a significant move toward addressing North Carolina’s opioid epidemic with the passage of the bipartisan Strengthen Opioid Misuse Prevention (STOP) Act.

, it seeks to reduce the number of pills in circulation by limiting the number a doctor can prescribe to first-time patients. The act sets up a statewide database to track prescriptions to cut down on “doctor shopping” by addicts. It also included a $20-million program for local substance-abuse treatment and recovery.

While legislators passed the STOP act without a dissenting vote, they inexplicably failed to fully fund the community-based program for addiction treatment and recovery in the budget – shorting it by half.

Why the failure to fully-fund this important program? More anti-Stein legislation? An ideology that blames the addict that in order to avoid needed community investment? There’s clearly unanimous agreement that we are dealing with a statewide opioid addiction crisis and bipartisan support for a plan to address it.

Another disappointing outcome from Jones Street.

Money isn’t the issue -- there’s plenty to address important issues like this.

This is a crisis. Failing to provide the full $20 million is a serious omission in a $23 billion state budget.

The legislature should make it a top priority, when it goes into session Thursday, to authorize the remaining $10 million to fully-fund the important STOP opioid treatment initiative. Contact your legislator now.

Send an email to members of the General Assembly to urge them to fully fund the Strengthen Opioid Misuse Prevention (STOP) Act. Use this address -- SenateE-mail@ncleg.net -- to contact state senators and use this one -- HouseE-mail@ncleg.net -- to contact members of the House of Representatives. To look up the email address of the House or Senate members who represent you, click here.