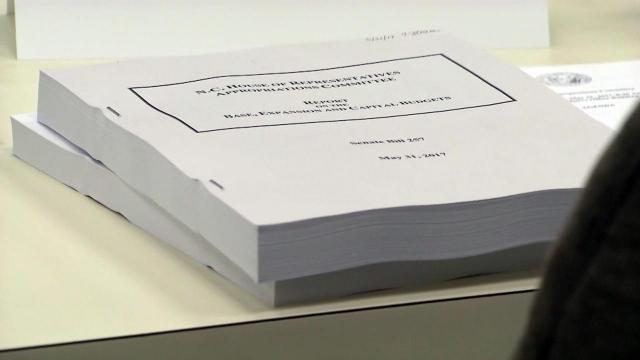 A CBC Editorial: Thursday, June 1, 2017; Editorial # 8168
The following is the opinion of Capitol Broadcasting Company

Want to know what the priorities and motives are for the leaders of the North Carolina General Assembly? The budgets produced by the state House and Senate provide a clear view.

The themes are consistent in both documents -- those who already have the most, get even more.

And those with the greatest need are considered freeloaders who refuse to work and want to bilk state government to finance their indolence. So what if we prevent 500,000 people from getting health insurance? They could get a job if they just tried – particularly the elderly and children.

The primary motive in the budgets is cutting taxes and building reserves. So, we see even more reduction in corporate income taxes, which makes the North Carolina Chamber of Commerce very happy (while it stays quiet about the need to invest more in the state and its people).

This is the leadership’s mantra despite the clear obligation they have to improve our state. The legislators have the responsibility to adequately fund public schools; fix the crumbling public infrastructure; promote public safety, innovation and economic growth; protect our natural resources; and grow the income level of North Carolina families.

Sure, the House version of the state budget is in some ways a vast improvement from what the state Senate produced. Unfortunately, the House budget still barely surpasses the Senate’s bargain basement standards – the elevator barely gets above ground level.

The House leadership is pulling a public relations full-court press on social media in backing the budget. In a series of slick, partisan illustrations, they trumpet small spending for scholarships for the children of veterans who died or were disabled in action and cutting the waiting list for pre-K programs. They boast about increasing funding for private school vouchers, cutting taxes $340 million and adding nearly $2 billion to the state’s “rainy-day” fund.

More telling about the true needs of the state was the typo-riddled graphic bragging about the budget’s “priorities” tweeted out by House Rules Committee Chairman David Lewis of Harnett County.

What good is it to provide a small amount of additional scholarship money when public schools and universities are neglectfully underfunded? What credibility does a legislature have when it promises to fix, than fails to address at all, proper funding of its mandate to reduce class size in lower grades? Just like this year, local schools, hundreds of teachers, thousands of students and parents will be uncertain about their jobs and futures next spring.

How responsible is it to continue to spend millions on private school vouchers when there is practically no accountability or transparency in where the money goes nor how the students perform academically? Not to mention that some of the schools discriminate on admissions.

These vouchers amount to government handouts with no strings attached. You can’t make this stuff up.

Despite the whitewash, this House budget is still bad news for most North Carolinians who want:

Granted the House budget is slightly less ideologically strident, avoids open hostility toward minorities and the disadvantaged and even backtracks on some wacky initiatives that had been included in the budget last year.

But this budget is a monument, at best, to mediocrity. The likely “compromise” from negotiating the differences with the Senate, will be more of the same. How long can legislators continue to shirk their responsibilities?