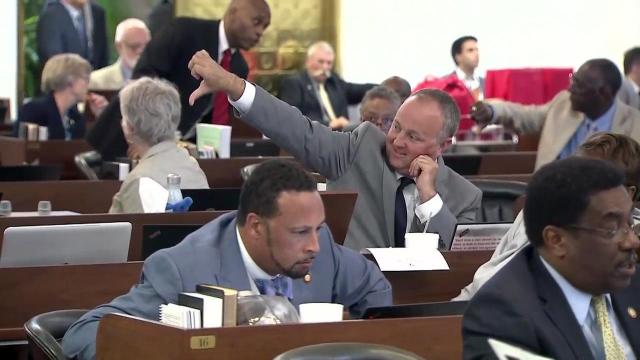 North Carolina is headed toward a self-made budget train wreck.

It is an unconscionable toll North Carolina’s legislative leadership and the state Chamber of Commerce have imposed on innocent citizens in return for unnecessary cuts to corporate income and other business-related taxes.

There’s no hocus-pocus. No ideological spin can hide the looming crisis. It is simply addition and subtraction.

North Carolina revenues are down – 1.2% or $62 million -- for the first quarter of the state’s budget year. This isn’t any isolated snapshot. It is a trend more than a year in evolution. Even if things don’t get any worse, there could still be a $250 million shortfall by the end of the fiscal year.

Add to that the huge $500 million sinkhole legislators made in the budget passed last June giving even more tax cuts for big business and the wealthy. Three-quarters of a billion dollars is big bucks – even in Raleigh.

Why is this a problem? It’s simple:

North Carolina is growing – about 110,000 more people annually -- the equivalent of a new Wilmington or High Point every year. All of these newcomers require basic services, schools, parks, roads and the like.

All this at a time when we know we aren’t even adequately funding the basics for the people here now.

Even a budgetary shift-shaft – cutting corporate and personal income taxes and making up for it by increasing sales and use taxes (that place a greater burden on middle and working class taxpayers to foot the costs of government) – won’t come near to making up the difference.

A flood of red ink in the budget will be devastating – making solving the state’s dire problems even more challenging. All of that becomes a self-fulfilling cycle legislative leaders have engineered: Taxes are cut; revenues plummet; and then leaders complain they don’t have the money for many necessary services so more spending cuts must be made.

It is disingenuous and a road to ruin.

It is intolerable that our teachers and school administrators are among the worst paid in the nation.

On top of that, the legislature has arbitrarily demanded a cut in the number of students in lower-grades but not provided adequate money to support it. Language, arts, music, physical education teaching jobs are in jeopardy. Local taxpayers may be force to spend millions to build more classroom facilities.

The state’s lack-luster recovery from the Great Recession has left many citizens without work while unemployment benefits are limited. Even more significantly, many workers are under-employed in jobs paying less than before.

The legislature is set to return to session in January – with an agenda that will continue much of the unnecessary mischief (gerrymandering electoral and judicial districts, HB 2, dangerously cutting the state Justice Department budget, attacking the authority of the governor, and more) that has dominated the work of the General Assembly since 2011.

Rather than pursue a destructive and unproductive agenda that mainly benefits big business and the wealthy, legislators need to recognize their obligations to ALL North Carolinians.

We suggest they spend their time taking care of immediate needs:

There’s still a lot more to do, but that will be an important start toward addressing the needs of ALL North Carolinians, not merely the self-serving agendas of a few greedy big corporations and ideologues.