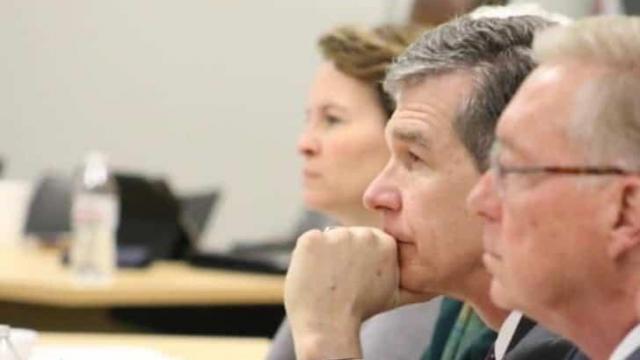 The message to North Carolina General Assembly’s leaders cannot be clearer – coming from a Superior Court Judge; the plaintiffs including six local school boards and 14 parents; the defendants including the state of North Carolina and the State Board of Education.

That message was echoed and amplified Tuesday by Gov. Roy Cooper and the state Commission on a Sound Basic Education:

“We have a once-in-a-generation opportunity to use our state’s resources to truly transform and strengthen our public schools. Our state has the resources to live up to our constitutional obligation to our children,” Cooper said. In his negotiations with legislative leaders, “I will work as hard as I can for strong investments in this plan so that we can make it a reality,” Cooper promised.

“For the first time in our history, North Carolina has a truly comprehensive, research-based plan for how we can ensure all students have access to a sound basic education. It is both a constitutional and a moral imperative that our state ensures that the Comprehensive Remedial Plan is fully implemented and that we allocate the resources necessary to get that done,” said Brad Wilson, chair of the commission.

The question for our legislative leadership is a basic and simple one of will. Are they determined to unequivocally stand up for public school students and parents, public school teachers and staff and the Constitution of North Carolina? Will they do what it takes?

Even they will admit our public schools are not delivering on the Constitutional promise. “I don’t think anybody would think we’re where we need to be in terms of educational outcomes,” state Senate leader Phil Berger said this week. “So, I don’t think there’s a lot of disagreement on that.”

Selectively picking data, as our legislative leaders habitually do, paints a phony portrait of their backing of public schools and progress they’re making on fulfilling the constitutional mandate.

It is past time to stem the DECLINE in support for public education. Over the last decade, per-student spending in the state has dropped 6% -- sixth lowest in the nation (page 21, WESTED report).

North Carolina per-student spending is about $3,000 LESS than the national average.

House Speaker Tim Moore says that it isn’t up to a judge to “direct how funds are spent in this state. “That is entirely the responsibility of the state legislature.” The order isn’t telling them WHAT to spend – but HOW to spend. Legislative leaders, for example, choose to spend millions on private school vouchers that do nothing to improve public schools.  Legislators might take the recommendations and have their own ways to implement the court order’s mandates.

If Berger and Moore aren’t happy with the achievement and attainment in our public schools, and they refuse to adopt the consensus Leandro remedial plan, they are obligated to detail what they would do to meet the state’s constitutional mandate.

After all, these are the same folks demanding adherence to the state’s constitutional requirement to present photo identification to vote. Why aren’t they displaying the same fervor over meeting the Constitution’s public education mandate?

If they don’t like it, maybe they should offer voters the chance to repeal the portion of Article IX of the State Constitution where it says the legislature must provide a system of free public schools “wherein equal opportunities shall be provided for all students.”

Put it to a vote. See where the people stand. We have a strong hunch the message would be pretty loud and pretty clear – and it would not support the legislature’s status quo.

Making this a debate about separation of powers, as the legislative leaders seek to do, is merely deflecting away from talking about the central issue – support for North Carolina’s public schools.

Adoption of the Leandro Comprehensive Remedial Plan is about providing EVERY child with access to a quality education. We believe it is a good and sound program.

That is what the debate MUST be about. If Berger and Moore don’t like the consensus plan (they should, by the way) don’t hide it in a fight over the state budget. Tell us, what is your plan?