Editorial: KAY HAGAN - Assertive and effective service to her constituents and state 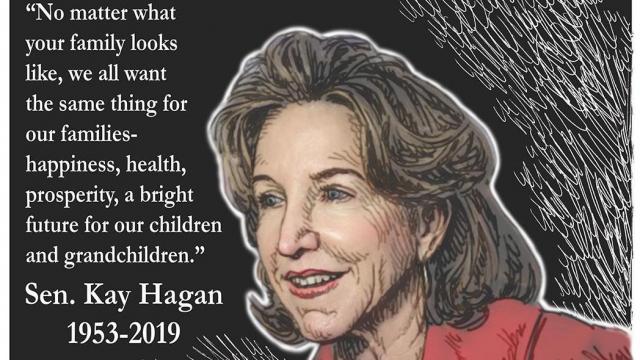 Kay Hagan was not to be under-estimated.

For those who did – whether they were an incumbent Republican U.S. Senator who also served as presidential cabinet secretary or a Democratic state Senate opponent who dismissed her as “Republican-lite” – it was at their peril.

In the North Carolina Senate, where she served from 1999 through 2008, she was not the loudest or pushiest. But she was effective, rising to become one of the Senate’s chief budget writers.

In her 9-point 2008 U.S. Senate victory over Elizabeth Dole, Barack Obama rode HER “skirttails” to victory – she outpolled him by more than 106,000 votes.

Hagan, 66, died Monday. In her life, particularly her public life, she was what she most valued – assertive and effective in service to her constituents and the state.

She had a noteworthy political pedigree – her uncle Lawton Chiles was a U.S. senator and Florida governor. She had key ties to the state’s business establishment as a lawyer for one of the state’s foremost banks.

While her time in the state legislature and then in the U.S. Senate( from 2009 through 2014) came amid greater partisan polarization, she was a true moderate both in her style; her approach to policy and legislation; and her voting record.

Hagan was able to maintain a rapport with Republican Richard Burr, the state’s other senator. Hagan attended Wake Forest University’s law school at the same time Burr was a Wake Forest undergraduate on the football team. Their work together, holding joint meetings and hearings, led to legislation that provided health care to thousands of people who were poisoned by toxic water at Camp Lejeune.

Her congressional victories weren’t always the stuff of headlines, but groundbreaking nonetheless. Early in her U.S. Senate term she broke the gender line for use of what was then the men-only senate swimming pool. She pressured Sen. Chuck Schumer, D-N.Y. who was the Rules Committee Chairman at the time, to open the pool to ALL senators.

When she lost reelection in 2014 to Republican Thom Tillis, there was no break in her high-energy style. She was a 2015 Institute of Politics Fellow at Harvard University where she examined the influence of money in politics. The 2014 North Carolina Senate race was, at the time, the most expensive Senate race in the nation – exceeding $100 million.

“I worry how we are going to get good people to run for office if you have to spend so much time raising money,” she said at the time. “In any competitive race you’re doing fundraisers at breakfast, at dinner, and it’s just so much time that should be spent on policy, on drafting legislation, on engaging with constituents back home.”

Her untimely death came nearly three years after an apparent tick bite during a Thanksgiving hike transmitted a form of encephalitis caused by the rare Powassan virus. While her public appearances were rare, on the day before her death she attended a political fund raising event for Democratic presidential candidate Joe Biden.

Former President Barack Obama offered a poignant remembrance of Hagan as a "terrific public servant." He said she was "eager to find common ground, willing to rise above the partisan fray, and always focused on making progress for the people she served. As President, I deeply appreciated her reasoned, pragmatic voice, whether we were working together to pass the Affordable Care Act, reform Wall Street, support working families, or just make Americans' lives a little better. Her record is one all public servants would do well to follow, and her perspective is one we'll sorely miss."