It was a sober session, devoid of the over-heated partisan hyperbole that too often pollutes discussion of critical issues and inhibits the ability to resolve differences and build consensus.

“It is absolutely mandatory under the state Constitution that every child in the state receives a sound basic education,” said state Superior Court Judge David Lee. His comments came as he presided Monday over yet another hearing concerning implementation of the Comprehensive Remedial Plan to fulfill the court-ordered mandate to assure every child has access to that “sound basic education.

“... I think everyone knows that I’m ready to pull out of the station and see what’s around the next bend. But I’m certainly willing to take a reasonable amount of time to address and better inform the court as to specifically what you believe ought to be the case here.” 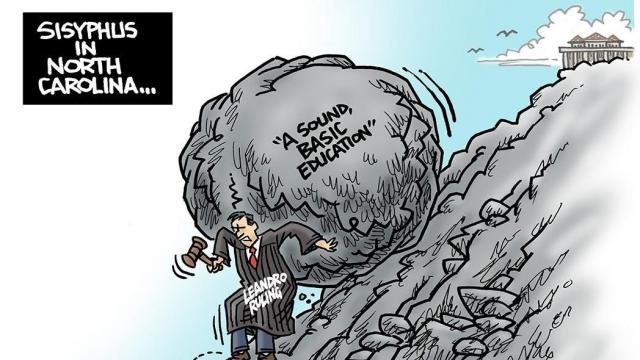 The General Assembly has the opportunity to act responsibly and move now to pass a budget that fully funds the court-ordered remedial education program. It is past time to end the legislative leadership protracted and childish obstinance. The school-yard taunts and insults of the judge and misleading insinuations about the consensus remedial program are undignified and must stop.

It has been Judge Lee’s deliberate, respectful and thoughtful approach that helped forge a consensus among the opposing parties in the Leandro lawsuit. It is that approach, akin to the determined style of Judge Howard Manning before him, that continues as he strives to implement the program with what he termed the court’s remedial powers.

“That mandatory requirement, it seems to me, should give the court sufficient authority to force what everyone has already agreed to is a not only reasonable and proper, but necessary plan both in terms of the actions to be taken and the monies necessary to go forward …,” Lee said. “I've heard no substantive criticism in this courtroom from anybody that would say that any numbers other than the numbers that support this report, are proper.”

While legislators shoot from the lip, Judge Lee cites fact and the law as background for his ideas, questions and stances. He doesn’t just say the legislature’s a party to the Leandro lawsuit, he goes to the statutes to back his case. And the law he points to is one the current leadership engineered.

They are he said, by their own act, parties in the lawsuit. “They have failed, neglected and refused to participate in any way in this proceeding.” He said it is within his authority as a judge to order government officials such as Berger and Moore to what they’ve neglected to do so far “simply taken care of these children. It doesn't appear to me to be that complex.”

North Carolina, for nearly a quarter century, has denied its children a fundamental right promised to them. A sound, reasonable and consensus approach to remedy that has been worked out by the parties in the lawsuit.

Legislative leaders have a simple choice. They can stand with the children of our state, give each one access to a brighter future that won’t just uplift individuals but our entire state.

Or they can continue to stoop to name-calling, misrepresentation and political game-playing. But that is a losing proposition. There is no partisan side in this issue. Obstruction will yield a short-live, pyrrhic victory.

Judge Lee, the plaintiffs and defendants in the Leandro have no personal stake in this matter. Yet they are united – no small accomplishment – in working to help deliver the promise of a bright future to all the state’s children.

It is time our legislative leadership stopped prioritizing their own political fortunes and worked to deliver on their pledge to uphold the state Constitution and uplift our present and future school students.

Since they haven't revealed a detailed plan of their own, legislators need to fully fund the Leandro remedial plan now.