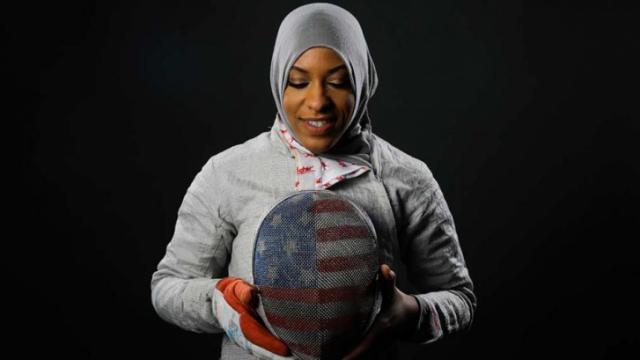 A CBC Editorial: Monday, Aug. 8, 2016; Editorial# 8039
The following is the opinion of Capitol Broadcasting Company

History is being made at the Olympic Games.

It is a phrase that will be repeated so many times – amid the stunning performances and against-all-odds achievements – it will become a worn catch-phrase.

But one member of the U.S. Olympic team made history Friday evening when she marched with her teammates, into Macarana Stadium.

There’s nothing special to notice when fencer Ibtihaj Muhammad, a 2007 Duke University graduate, competes in the saber, with the protective mask, helmet and uniform.

It is what’s under the helmet, what the world saw during the opening parade of athletes, that was history-making. She is the first U.S. Olympian to compete in a hijab – the traditional head and neck-covering – and the first Muslim women representing the United States in international fencing.

Just as important, is what is not history-making about Ibtihaj Muhammad. She calls herself “your basic Hijabi Zorro.” She’s a suburban Jersey girl – born and bred.

They share a steadfast belief that this is a nation where aspirations can be fulfilled, no matter who you are or what your background. Similarly, that way of life and that promise is something worth protecting and, if necessary, with the ultimate sacrifice. Just ask Khizr and Ghazala Khan, whose, son Capt. Hymayun Kahn was killed in action in Iraq in 2004.

Muhammad shares much in common with most of the U.S. athletes. She got started in sport as a youngster – during middle school, which is actually late for fencers – and excelled in college – a three-time All-American at Duke.

Unlike the megastars, who have sponsorships and other backing supporting their training, there’s no big money in fencing. She lives with her parents in New Jersey where she was a substitute teacher and coached fencing at her own high school. She’s founded a modest women’s clothing line and receives a stipend from the U.S. Olympic Committee.

Like many of her fellow U.S. team members, she’s outspoken and forthright. Her Team USA website profile says she “aspires to be the first U.S. athlete to compete at the Olympic Games in a hijab.”

After the opening ceremony, Muhammad will go on to what she came to the Olympics to do – compete to win for the United States.

Women’s saber competition starts today. She’ll be competing in a hijab. But, don’t look for it.

If you want to spot Muhammad, just look for the mask emblazoned with the American flag.